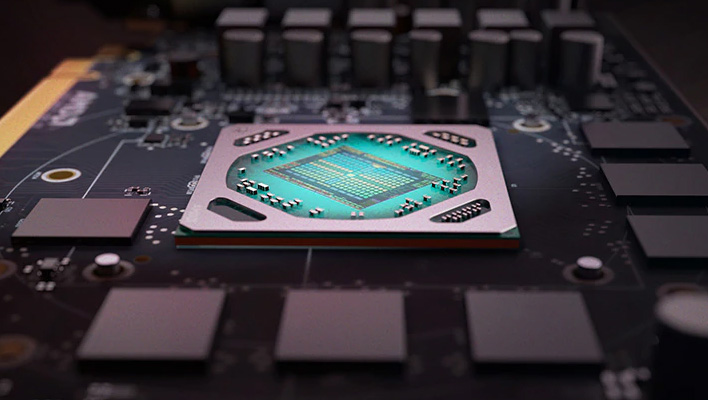 War is usually hell, except when we are talking about the GPU wars, of which a new skirmish is about to get underway. Hot on the heels of NVIDIA formally introducing its GeForce RTX 30 series based on Ampere, it is rumored AMD will look to undercut its rivals pricing with the release of its Radeon RX 6000 series, with Big Navi underneath the hood. Let the next-gen battles begin!
Before we get to what AMD is cooking up, let's quickly recap NVIDIA's launch. The GPU maker introduced three cards, priced as follows...
It is an enticing lineup for sure, with better-than-expected specifications (more CUDA cores than rumors had previously indicated) at somewhat pleasantly surprising price points. Sure, the GeForce RTX 3090 is uber-expensive at $1,499, but that is essentially this generation's RTX Titan. As far as NVIDIA is concerned, the GeForce RTX 3080 is its flagship consumer card, and at $699, it's probably in the neighborhood of what the next-gen consoles will cost (give or take).

Getting back to AMD, the company has confirmed it will be releasing a new round of graphics cards this year, based on its second generation Radeon DNA architecture. Otherwise known as RDNA 2, the company also said the GPU we have all been referring to as Big Navi will underpin its halo products. 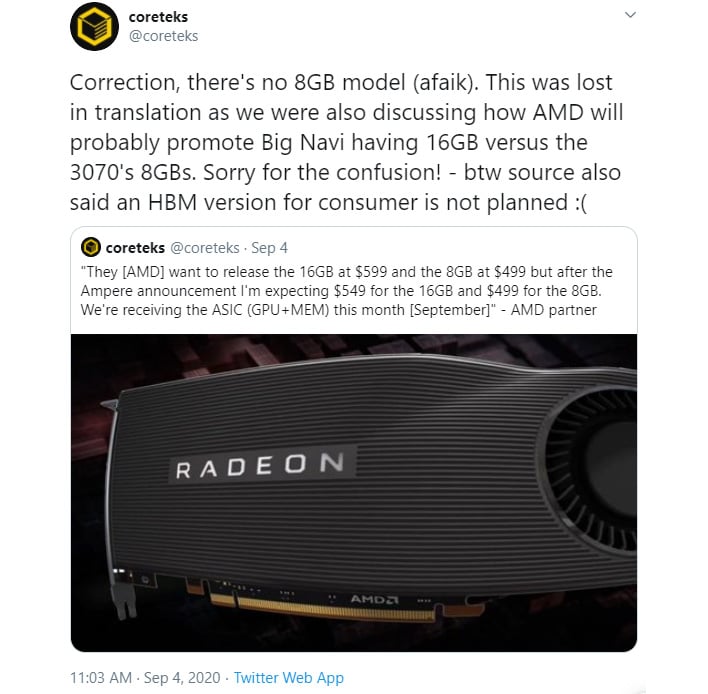 How will pricing shake out? According to Twitter user @coreteks (who also posts technology analysis videos on YouTube), there will be a version of Big Navi with 16GB of memory priced at $549. If true, the part will have more memory (+6GB) and cost less (-$150) than the GeForce RTX 3080.
The initial tweet stated there would also be an 8GB model priced at $499, but @coreteks walked that back in a follow-up post, saying something got lost (from their source) in translation.
Part of what's interesting is that the source claims AMD initially wanted to charge $599 for its Radeon RX 6000 series part (we presume it will be dubbed the Radeon RX 6000 series, anyway). But after NVIDIA rolled out is Ampere GPUs at surprising price points, AMD decided to shave a few bucks off its upcoming 16GB model, as the story goes.
We have no way of knowing if any of this is actually true. However, it's not unprecedented. When launching the Radeon RX 5000 series, AMD claims to have 'jebaited' NVIDIA by planning a price drop behind the scenes. AMD essentially wanted to counter NVIDIA's pending GeForce Super series launch.
"The prices that we originally put out, we waited to see what they put out, and then we made the appropriate move—not only to de-position their Super series, but also to logjam their 2060 and 2070. Because we knew that they were having slower success and we wanted to do a double jebait, not only block their Super strategy, but also slow down the 2060 and 2070," AMD's VP and General Manager of the Radeon Business Unit, Scott Herkelman, told us during a podcast last year.
Later on, NVIDIA would slash pricing on its GeForce RTX 2060 to battle the Radeon RX 5600 XT. So it goes to show that AMD and NVIDIA are very much engaged in GPU pricing warfare, which is great for consumers. It is also the reason why we can believe it is possible AMD initially had a higher price in mind for its Radeon RX 6700 (or whatever part will have 16GB of memory), and then decided to reel it in a bit.
On the flip side, could NVIDIA also be preparing a counter move? The gap between the $699 GeForce RTX 3080 and $1,499 RTX Titan GeForce RTX 3090 is pretty big, leaving room for a GeForce RTX 3080 Ti. Likewise, NVIDIA could squeeze a GeForce RTX 3070 Ti into the $599 spot, or even at $549, if it wanted to.
Stay tuned folks, things are about to get very interesting.