Before AMD announced its RDNA 3-based Radeon RX 7900 series graphics cards on Thursday, wild rumors were flying from regularly-reliable leakers about their clock rates. Numbers as high as 4 GHz were bandied about. The final parts are clocked well below 3 GHz, with the RX 7900 XT topping out at 2.5 GHz, but AMD definitely had 3 GHz in mind, and seems confident the chips can hit that clock rate.


That's not just according to the report we told you about on Saturday, where a reporter let slip that AMD was targeting 3 GHz with Navi 31, but also to a new slide leaked by Videocardz. The picture, which we'll reproduce below, seems to have been taken during an AMD presentation, and it clearly shows a diagram of the Navi 31 GPU, which is the biggest RDNA 3 graphics processor. 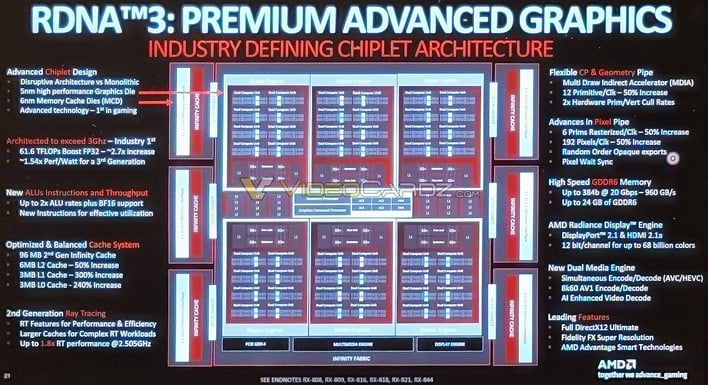 On the diagram are a number of fascinating technical details, like discussion of the chip's 8K60 AV1 encode, 1.8x ray-tracing performance at iso clocks versus RDNA 2, and increased L0, L1, and L2 caches. However, the most interesting tidbit is over on the left, where it says "Architected to exceed 3 GHz," with a little note that indicates that this would be an industry first.


It would be, for sure, if it's true. We don't actually know yet what kind of clock rates the Radeon RX 7900 XTX can hit under boost—especially on partner cards that may have an increased power limit and improved power delivery. However, it's rather telling to us that AMD made no public claims about anything to do with "3 GHz" in its presentation. Whether those remarks were cut for time or held back by an anxious lawyer, we may never know. 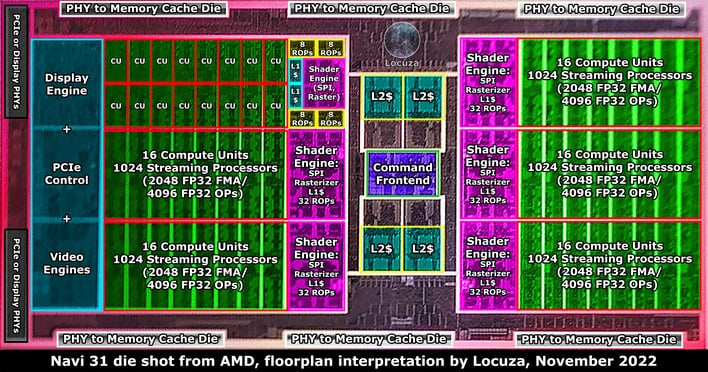 Twitter user and processor layout enthusiast @Locuza_ has also done one of his trademark annotated die shots for RDNA 3's GCD. If you'll recall, AMD's RDNA 3 GPUs are the first to be designed with a chiplet architecture that splits the graphics processing and compute functions from the memory controllers and cache. Those are on separate dice, which allows them to be manufactured on older processes, since they don't need the ultra-high-density manufacturing that compute functions do. This annotated die shot is only the Graphics and Compute Die, or GCD.