There's a new Linux driver release that contains a reference to an upcoming AMD graphics processing unit (GPU) codenamed "Navy Flounder," and now I can't get that Pinkard & Bowden song out of my head. You know, the fishy one titled, "I Lobster But Never Flounder." Yeah, don't judge, click that link and it will be stuck in YOUR head as well. You're welcome.

But I digress—I'm not here to discuss goofy country songs. This is all about AMD's upcoming Navi launch, which is underpinned by the same second-generation Radeon DNA (RDNA 2) architecture that will power both Sony's PlayStation 5 and Microsoft's Xbox Series X consoles, as well as a new round of Radeon graphics cards.
Spotted by Twitter user Komachi, the driver patch calls out several references to an AMD GPU codenamed Navy Flounder. Here's a snippet... 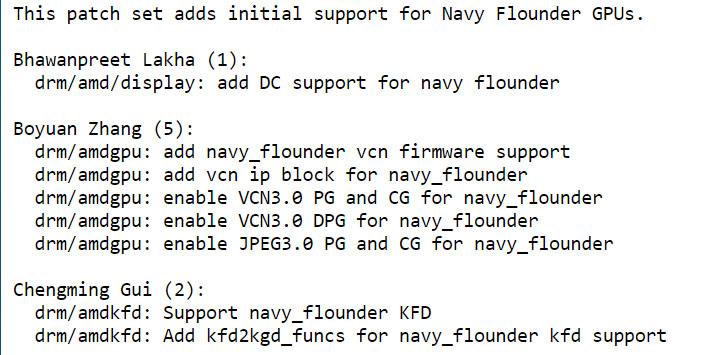 As spotted by another Twitter user (Coelacanth's Dream), Navy Flounder appears attached to AMD's upcoming Navi 22 GPU. This would presumably replace the Navi 12 GPU inside the Radeon RX 5600M with HBM2 memory for Apple Mac computers. However, all we get here is a bunch of references, and nothing in the way of specifications.
This is not to be confused with Navi 21, otherwise known as Big Navi, or Sienna Chchlid. Big Navi is the GPU we are anxiously awaiting, and which could potentially shake things up in the graphics space, giving NVIDIA some much needed competition at the high end.
We're cautious optimistic about RDNA 2 in general. According to AMD, it's next-gen graphic architecture will offer a 50 percent bump in performance per watt over its current-gen RDNA architecture, which itself offered the same increase over GCN.
At least some of AMD's RDNA 2 parts will also feature hardware support for real-time ray tracing, just as NVIDIA's current GeForce RTX cards do.