AMD has not yet released its fourth generation EPYC "Milan" server processors based on its Zen 3 CPU architecture, but barring any last minute snags, those chips are coming any day now. Looking further down the road, a new leak highlights a possible fourth generation EPYC "Genoa" configuration based on Zen 4, with some interesting details.
Up to this point, details about Genoa have been rather scarce. We know it will be built on TSMC's 5-nanometer manufacturing process, and that it will power El Capitan, which is set to become the world's most powerful supercomputer when it is fully deployed in 2023. The latter revelation comes by way of a joint announcement between AMD, Hewlett Packard Enterprise (HPE), and Lawrence Livermore National Laboratory (LLNL).
"El Capitan will be powered by next-generation AMD EPYC processors, code-named 'Genoa' and featuring the 'Zen 4' processor core, next-generation AMD Radeon Instinct GPUs based on a new compute-optimized architecture for workloads including HPC and AI, and the AMD Radeon Open Compute platform (ROCm) heterogenous computing software," LLNL said last year.

Beyond those tidbits, we are left to leaks and rumors. To that end, leaker and Twitter user @ExecuFix claims to have the inside scoop on one of AMD's eventual Genoa chips, one that wields 96 cores and 192 threads. They say it will also feature 12-channel DDR5-5200 memory support, as well as 128 PCI Express 5.0 lanes (160 lanes for 2P configurations), and have a 350W TDP configurable up to 400W. 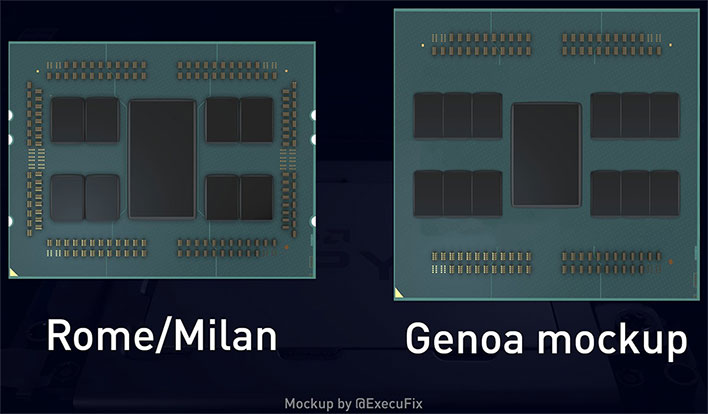 The leaker also concocted a render of Genoa, to show how it might possibly compare in appearance and makeup to Rome (Zen 2) and Milan (Zen 3). This is not a real image, mind you, but a "mockup based on the Rome image" depicted at a 1:1 scale. "This is what Genoa will look like under the hood compared to Rome/Milan," @ExecuFix says.
What the mockup shows is a 12-chiplet design, each with eight cores to arrive at 96 cores and 192 threads, plus a larger I/O die in the middle in a square-shaped package (rather than rectangular). It is a physically large slice of silicon compared to Rome and Milan, and it will be paired with AMD's SP5 platform sporting a new LGA-6096 socket design, according to the leak.
Supposedly, anyway. Another leaker, a "retired engineer and businessman" who goes by @chiakokhua on Twitter, replied to the mockup saying, "Bet you $6 this is incorrect." This prompted a response by @ExecuFix, who said they will "gladly take your $6."
Make of that friendly banter what you will. In any event, Genoa will go up against Intel's upcoming Sapphire Rapids Xeon processors, also with DDR5 and PCIe 5.0 support. Sapphire Rapids is also rumored to employ up to four 16GB HBM2 cores, which could make things interesting.