Back at Intel's Architecture Day 2020 event, the chip maker divulged certain details about its 10-nanometer SuperFin technology, and talked a little about its next-generation Xeon Scalable processors, codenamed Sapphire Rapids. It seems Intel is on track to Sapphire Rapids later this year, as evidenced by photos of what are purportedly actual engineering samples.
Sapphire Rapids is based on Intel's enhanced SuperFin technology, which presumably offers better performance and power characteristics compared to the current generation Xeon Scalable lineup. Intel's upcoming 4th Gen Xeon chips will also bring new technologies into the fold, including DDR5 and PCI Express 5.0 support, Compute Express Link 1.1, and built-in AI acceleration using new Advanced Matrix extensions.
It looks to be a meaty upgrade, though obviously we will have to wait for shipping silicon to arrive for a full and fair assessment of performance. In the meantime, an early engineering sample appears to have found its way into the wild. Bilibili forum member Yuuki-AnS posted some images of the chip, including the one shown above, and this one below... 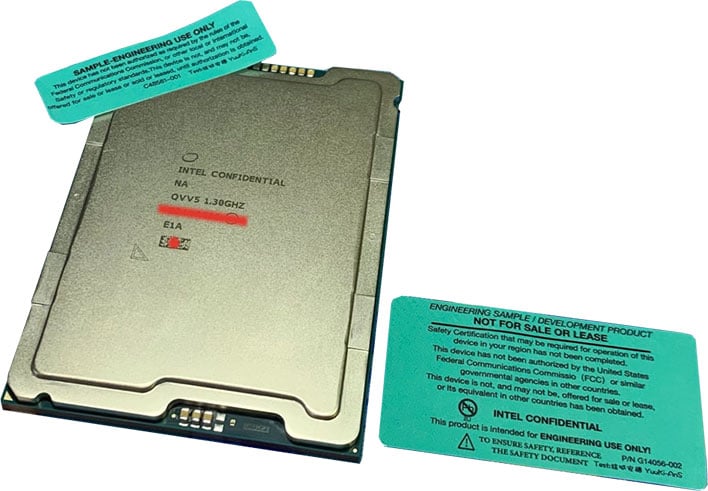 Specifications are very likely to change by the time finalized silicon begins shipping, though assuming these are legitimate photos, the general takeaway is that Intel's roadmap is intact. The company previously said it expects to start initial production shipments in the second half of this year. Intel already has at least one major customer lined up—Sapphire Rapids will be deployed in the Aurora Exascale supercomputer at Argonne National Labs.
The leaked photos come on the heels of an Intel architecture document revealing a juicy tidbit, that Sapphire Rapids will feature on-package high bandwidth memory (HBM). This has the potential to offer a significant increase in bandwidth.

In addition to photos of the actual ES chip, the user also shared a pinout diagram... 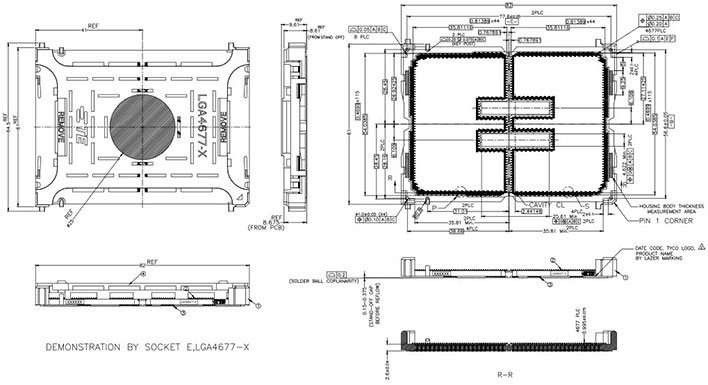 According to the leaked information, Sapphire Rapids will fit into a new LGA4677-X socket. The additional pins over LGA4189 enable some of the new features discussed above.
The leaked info also suggests Sapphire Rapids will feature up to four 16GB HBM2 cores. As for this particular ES chip, it is clocked at 1.3GHz, which the leaker says is a "normal value for early samples."