For the past several weeks, it has been rumored that Big Navi will burst onto the GPU scene wielding 80 compute units (CUs), making it a potential monster. To put that into perspective, it is twice the number of CUs as the current generation Radeon RX 5700 XT. Now we have the closest thing yet to a confirmation, by way of reverse engineering a macOS driver.

It seems AMD is getting its ducks in a row, and in the process, inadvertently (or perhaps on purpose) left a trail of finely ground bread crumbs, for those willing to look. Reddit user stblr did exactly that, and posted directions on how to view the data for yourself. It consists of the following steps...
Using the above method, they were able to peek into AMD's driver package and extract some key information pertaining to not just Navi 21 (Sienna Cichlid), otherwise known as Big Navi, but also Navi 22 (Navy Flounder) and Navi 23 (Dimgrey Cavefish)—all part of AMD's upcoming Radeon RX 6000 family. There are even references to Navi 31, which is apparently an early reference to AMD's next next-gen GPU architecture, RDNA 3.
Let's get to it, shall we? 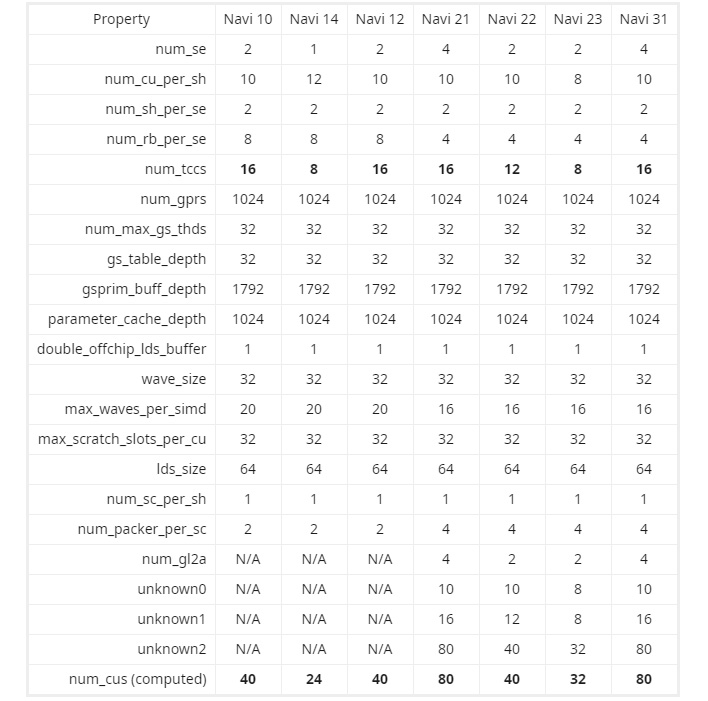 This data builds upon a previous breakdown by the same user of a recent update to AMD's RadeonOpenCompute (ROCm) platform. As was explained before, you arrive at the total number of CUs by multiplying the first three values in the above chart. So for Navi 21, it would be 4 times 10 times 2, arriving at 80. Assuming each of those CUs has 64 cores, we would be looking at 5,120 stream processors.
It is said that Navi 21 and Navi 22 both have "significantly higher clocks than Navi 1x." In addition, Navi 21 supposedly supports both HBM2 and GDDR6 memory, so it will be interesting to see how things pan out for shipping cards.
The data further suggests a boost clock of 2,050MHz for one of the Navi 21 variants and 2,200MHz for the other one. That would amount to around 22.5 TFLOPS of single-precision (FP32) performance. To put that into perspective, the Radeon RX 5700 XT offers 9.754 TFLOPS of FP32 performance. And while it is of less value to compare TFLOPS from totally different architecture, NVIDIA's 20 offers 29.77 TFLOPS, in case you are wondering.
Paired with 16GB of memory, Navi 21 could be one heck of a fast card, capable of comfortably playing games at a 4K resolution. Of course, we still have no idea how it will handle real-time ray tracing workloads, only that it will be supported at the hardware level.
As for Navi 22, the mid-tier GPU will feature 40 CUs and 2,560 shader cores, with a 2.5GHz clockspeed and 12.8 TFLOPS for performance, if the data in the table proves accurate. That is a little bit better than what the Xbox Series X will deliver (on paper, anyway). And Navi 23 will sport 32 CUs and 2,048 stream processors.
This all bodes well for AMD's upcoming launch. NVIDIA came out swinging with its GeForce RTX 30 series, and if these specifications hold true, there will be some true competition at the high end, at least up to the GeForce RTX 3080 (it looks like the GeForce RTX 3090 is safe on its performance throne).
Just bear in mind that nothing is ever official until it actually becomes official. That could work out in AMD's favor, though. To wit, the leaks and rumors ahead of the GeForce RTX 30 series underestimated the number of CUDA cores each card would have, and overshot pricing.