AMD's FSR 1.0 was a solid first effort by the company, but as is the case with any new technology, there is always room for improvement. FSR 1.0 is mostly a post-processing filter that attempts to make a blurry, low-resolution image look clearer by applying a sharpening filter. It's better than a linear upscale, but lacks some of the features and capabilities of more advanced upscaler offerings. 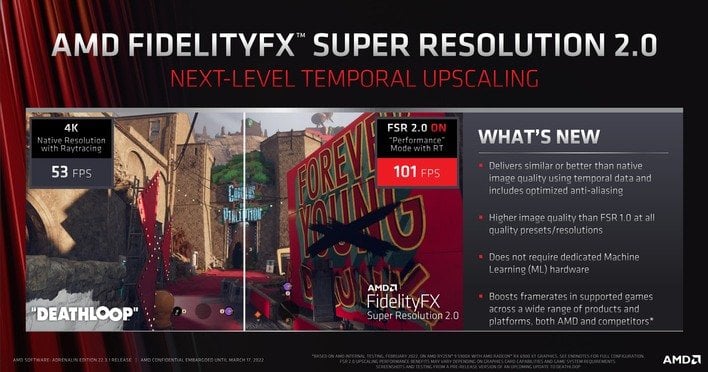 In that same article, we mentioned AMD's FSR 2.0, but there weren't too many details available at that time. Now, AMD has a blog post up on its site offering a bit more information on the upcoming upscaling algorithm to go along with its GDC talk on the topic. To be honest, there's ultimately not a tremendous amount of new information here either, but we'll go over the details for folks who don't follow this stuff as closely as we do.

AMD FSR 2.0 Is All New And Very Different Than The Original

The second iteration of AMD's FSR 2.0 is arguably mis-named, because as AMD itself says, it is "built from the ground up"—not actually an iteration on FSR 1.0. Indeed, where FSR 1.0 was basically a smart ReShade filter, FSR 2.0 is a whole other ball game. It makes use of temporal data as well as depth information to perform image upscaling, similar to NVIDIA's DLSS. 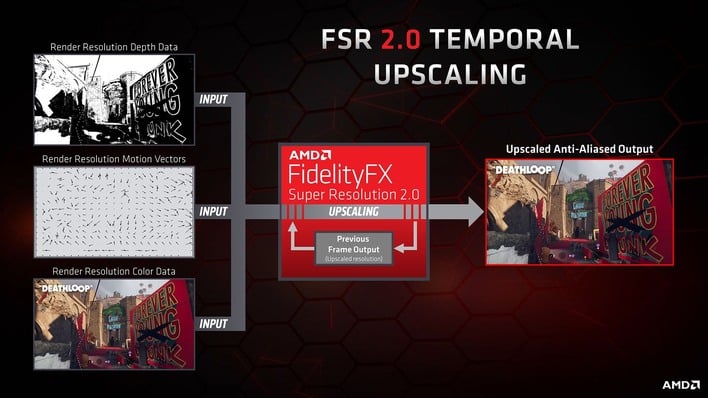 If that sentence sounds like gobbledygook to you, it means that the scaler looks at previous frames to help upscale each new frame. This can help FSR 2.0 preserve detail that is lost to shimmering caused by insufficient input resolution in later frames. By adding back in this data to the composition of later frames, the upscaler also functions as a form of anti-aliasing.


One key difference between Mean Green's solution and the Red Team's new upscaler is that DLSS requires the presence of specialized machine learning hardware in GeForce RTX GPUs. There is some contention on the details of this matter, but NVIDIA is firm on the topic, so either way: it doesn't work on non-RTX graphics cards that lack that hardware. Meanwhile, AMD's FSR 2.0 requires no such hardware acceleration. AMD says that rather than a pre-trained neural network, FSR 2.0 relies on "advanced hand-coded algorithms" to do its magic.


In the end, FSR 2.0 is starting to sound a lot like temporal anti-aliasing-based upscalers, such as that included in Unreal Engine 5. Don't take that as a dig, though. As a single example, Unreal Engine 5's upscaler looks fantastic; just go watch The Matrix Awakens on a PlayStation 5 or Xbox Series X and try to notice when the resolution dips below native. (Hint: you probably won't without pixel counting.)


Like its predecessor, FSR 2.0 is also GPU-agnostic; it will work just fine on NVIDIA (and likely Intel) GPUs. FSR 2.0 is coming to console games, too—at least on Microsoft platforms. AMD confirmed that FSR 2.0 will be part of the Xbox GDK for game developers to use if they choose. Folks who are developing their own game engines will be able to integrate FSR 2.0 using the MIT-licensed open source, and it'll also be available as a plug-in for Unreal Engine 5.

Unfortunately, due to being more tightly-integrated with the renderer, FSR 2.0 is going to be slightly more involved for developers to implement. Moreover, it's not coming to Radeon Super Resolution anytime soon. FSR 2.0 requires access to motion vectors and depth data, and those values aren't something you can get from screen space. So saying, just like DLSS, FSR 2.0 will require game developers to add it to their game.

AMD says that the first implementations of FSR 2.0 will arrive in Q2 of this year, starting with a patch for Arkane Studios' Deathloop. The upcoming game Forspoken (from Square Enix subsidiary Luminous Productions) will also include FSR 2.0 at its launch, which is currently planned for October. We'll take a look at it once it arrives, but things are looking promising from where we stand.