Awhile back, around the release of the GeForce RTX 3090 Ti, Mr. Wallossek over at Igor's Lab stated that he expected the boards for the RTX 3090 Ti to be re-used for the next-generation GeForce RTX 4090. Other folks said that was not the case, but we didn't have any confirmation on the matter until now.


The new information comes from the same source. He was given a photograph of a pre-production board for the GeForce RTX 4090, which is expected to launch in August. He declined to post the photograph citing anonymity concerns for his source, but he did post a modified form of the image overlaid with his predictions for the card, based on the RTX 3090 Ti's PCB. We'll reproduce it below: 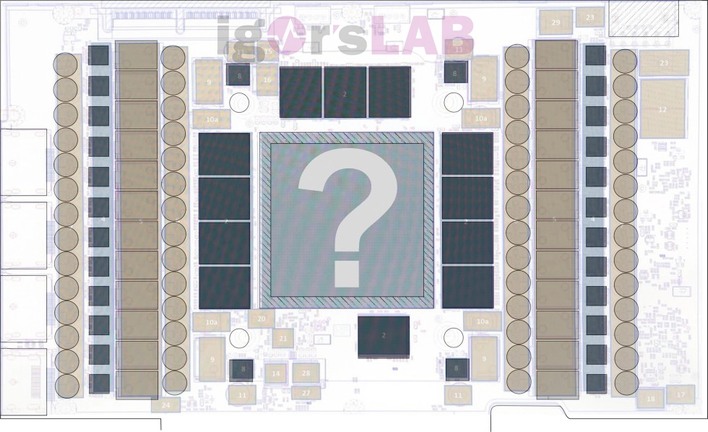 Looking over the layout, it actually is extremely similar to the RTX 3090 Ti's board. The overall configuration of power delivery and memory components is nearly identical. The NVLink connector on the RTX 3090 Ti carries over to the RTX 4090 PCB, and the quartet of display outputs seems to be the same, too. In the top right of the diagram we see the 16-pin power connector, which should be the final 12VHPWR plug capable of carrying 600 watts.


Other leakers have speculated on the existence of a GeForce RTX 4000-series card with a power spec even higher than 600 watts, but Igor says it's really still too early to speculate on something like that. Still, it's all-but-given that we will see a card that maxes out the 12VHPWR connector, anyway. Whether that is the GeForce RTX 4090 or a later, faster card is anyone's guess.


Igor also goes on to note that he knows "reliably" that the add-in card vendors do not have Ada Lovelace silicon yet. If his information is accurate—and we have little reason to doubt him—he says that all of the testing being done so far is still using GA102 silicon. He provides a chart that purports to show the stages of producing a GeForce GPU, and indicates that we're unlikely to see any real leaks until the middle of July at the earliest.
Thumbnail and top images: Galax GeForce RTX 3090 Ti HOF