Galax's collection of Hall of Fame OC Lab Edition graphics cards are stunning beauties, and not just on the outside. Japanese overclocker Duck OC managed to get his hands on the latest variant, the Galax GeForce RTX 3090 Ti Hall of Fame OC Lab Edition, and promptly removed the water cooling block for an impromptu photo shoot.
In doing so, we get a better look at the card's gorgeous white printed circuit board (PCB). It's certainly spiffy, but it's also dressed to the nines with a delightfully beefy 28-phase (24+4) power design donning the 14-layer board. That's up from the 21 (18+3) VRM phases found on NVIDIA's GeForce RTX 3090 Ti Founders Edition model. 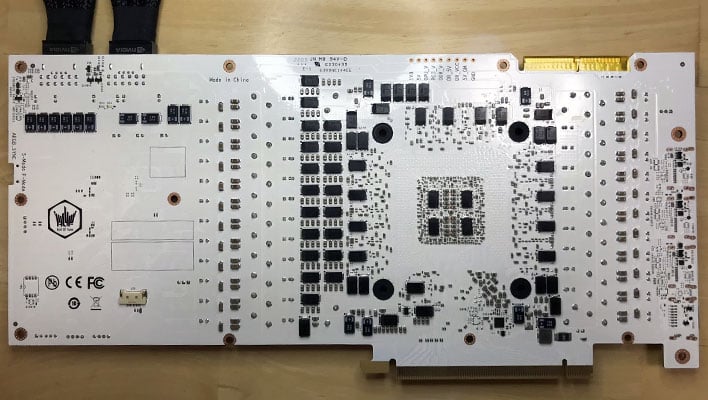 NVIDIA's latest flagship is a thirsty graphics card for sure, with a 12-pin power connector that, for most users, will connect to their power supply unit (PSU) with a three 8-pin PCIe adapter cable. Galax's HOF model, however, is one of a small few of extreme enthusiast models to flaunt dual 16-pin PCIe connectors. That means snaking six 8-pin PCIe cable connectors by way of using two adapter cables.
In theory, that could supply up to 1200W of power (each 12-pin connector is technically capable of carrying 600W). The max TGP is actually less than half that, but still beefy at 516W. In case it's not obvious, these cards are built for enthusiasts to push the limits. This is facilitated with a dual BIOS configuration and voltage read points (these cards are often used in LN2 setups).
Out of the box, the card sports a 1,920MHz boost clock in Performance mode, up from NVIDIA's reference 1,860MHz boost clock. It's a safe bet, however, that Duck OC and other owners of this card will push things even further.
It's not clear when the HOF OC Lab Edition variant will be available or how much it will cost.