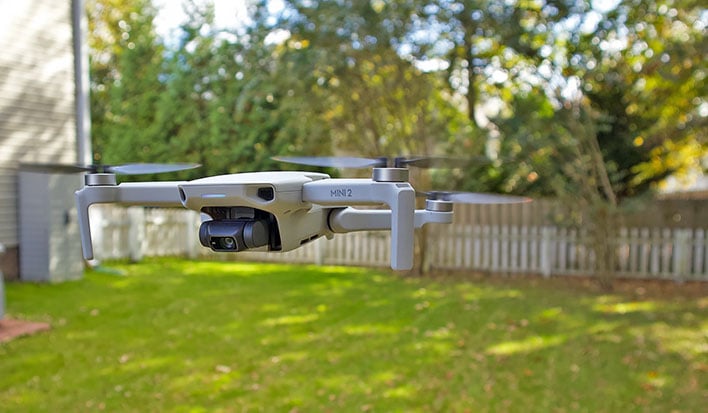 A few months back, we took DJI's Mavic Air 2 for a test flight and came away impressed with its performance, overall photo/video capabilities, and its ability to stay aloft for a half hour or more. Today, DJI is back again with another new drone, and this one will go a lot easier on your wallet than the Mavic Air 2. We're talking of course about the Mini 2; the "Mavic" portion of its name has been dropped with this generation.

The Mini 2 retains the compact, lightweight form-factor of the Mavic Mini, weighing in at just 249 grams. This allows the Mini 2 to continue to skirt Federal Aviation Administration (FAA) regulations that require drones that are 250 grams or heavier to be registered. But while the Mini 2 may look very similar to the preceding Mavic Mini, there is a lot going on under the hood that makes it an even more compelling option for those looking to get into an entry-level drone, including new 4K recording capabilities and the adoption of OcuSync 2.0 transmission technology. So, shall we take to the skies? 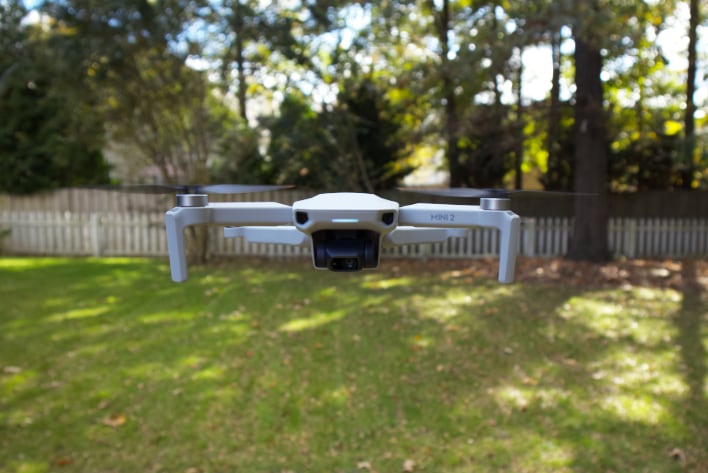 Coming from the Mavic Air 2, opening the box of the Mini 2 was quite the revelation. The Mavic Air 2 grew a little in size and weight compared to the original Mavic Air, so the Mini 2's diminutive dimensions are even more apparent. And at 249 grams, the Mini 2 is less than half the weight of the Mavic Air 2. Despite this, there is clearly a familial resemblance right down to the folding front and rear legs. 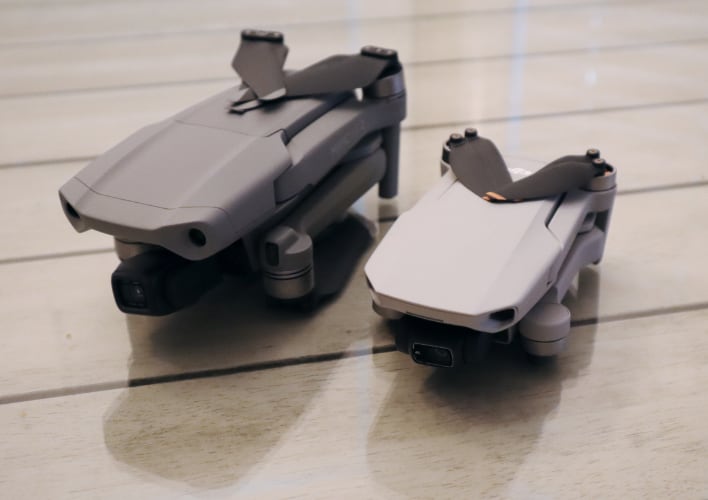 Perhaps the biggest addition to the Mini 2 is OcuSync 2.0 transmission technology, which replaces Wi-Fi transmission that was used in the outgoing Mavic Mini (and the original Mavic Air). With OcuSync 2.0, the Mini 2's maximum transmission range has been boosted to 10 kilometers, which represents a 150 percent increase compared to the Mavic Mini. OcuSync 2.0 will operate on either 2.4GHz or 5.8GHz frequency bands depending on operating conditions, and can automatically switch between the two to ensure that your video feed stays crystal clear up to the maximum range limits. 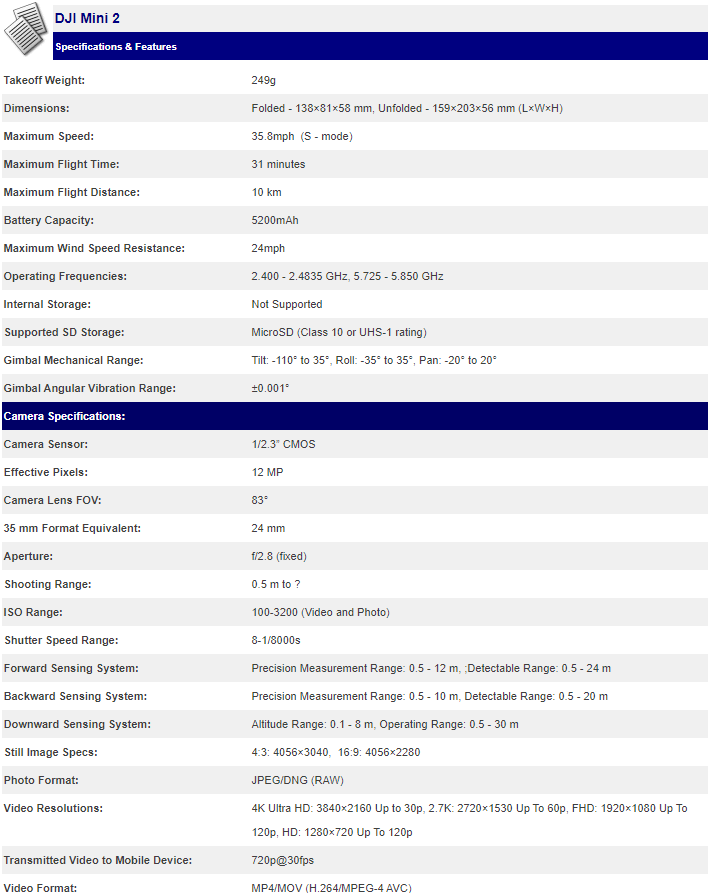 Battery life has also been improved ever so slightly, now coming in at 31 minutes instead of 30 minutes thanks to upgraded motors. These new, more powerful and efficient motors are also responsible for allowing the Mini 2 to withstand crosswinds of up to 24 MPH. 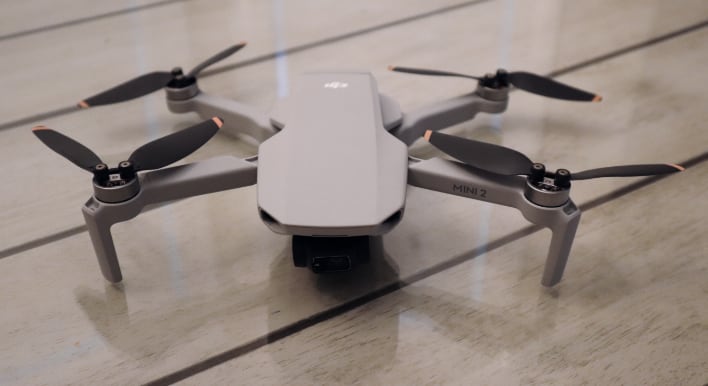 The other big addition to the Mini 2 is that support has finally arrived for 4K/30fps video at 100Mbps (DJI reserves 4K/60fps recording for the higher-end Mavic Air 2). DJI is also allowing 4x zoom at 1080p, 3x zoom at 2.7K and 2x zoom at 4K. And in addition to saving phots in the requisite JPEG format, RAW is now supported as well.

The Mini 2’s lightness is in part due to its trim dimensions, and also because of its choice of materials. The plastic on the Mini 2 is definitely a bit “cheaper feeling” and thinner than what you’d find in the Mavic Air 2, and that’s understandable given its much cheaper price tag. Afterall, coming under that 250-gram FAA limit was the primary motivation here, and DJI definitely succeeded in that goal.

As for ease of use and maintenance, the USB-C data port and microSD card are exposed on the Mini 2, whereas the Mavic Air 2 has its ports hidden behind a rubber door. Some would probably prefer their ports to be less exposed to the elements, but we actually like the fact that they’re readily accessible without having deal with a fiddly door. And on the plus side, the ports are on the back side of the done instead of the front side, so they're less susceptible to get clogged with dead bug guts as you're blasting through the sky at 35 MPH. 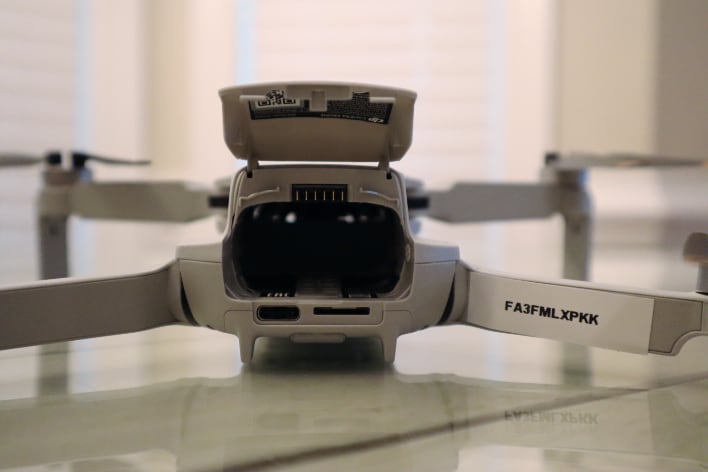 Also of note are the propellers, which can become easily damaged when landing in high grass (or debris), or if you manage to get a little too close to obstacles. On the older DJI Spark and on the Mavic family, there’s a simple push-and-twist release mechanism that allows the four propeller sets to be easily removed. With the Mini 2, each individual blade has to be removed separately; and each are secured with a tiny Phillips head screw. Not only does this mean that you need to carry around an extra tool with you, but you have to remove and reattach 8 screws to replace the full allotment of propellers. It’s a bit excessive in our opinion and we hope that DJI goes back to the “old” way of attaching the propellers in future versions.

The controller for the Mini 2 is largely similar to the one found in the Mavic Air 2, which means that it also features the same spring-loaded arm – for better or worse – to attach your smartphone. The Mini 2’s controller comes with a removeable Apple Lightning adapter already attached, but there are also microUSB and USB-C adapters included for hooking up your Android smartphone. The thumb sticks on the controller are removable for easier transporting (they snap into the bottom of the controller when not in use), and it is charged via a USB-C port located on the bottom. The controller itself has a nice “heft” to it and feels like a high-quality product all-around. 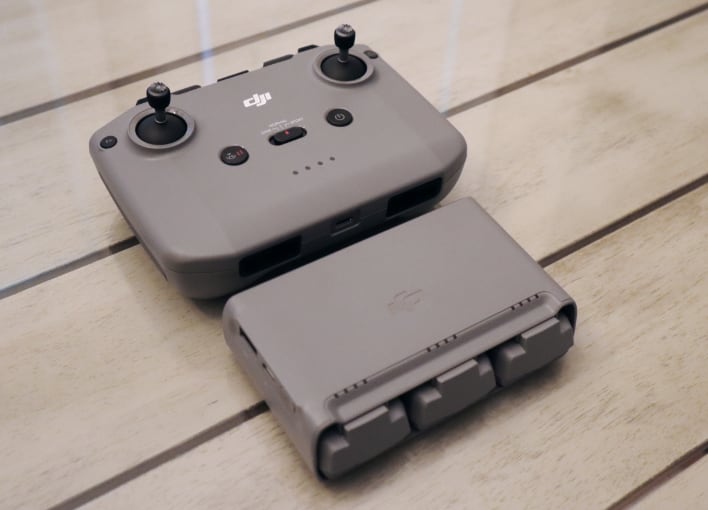 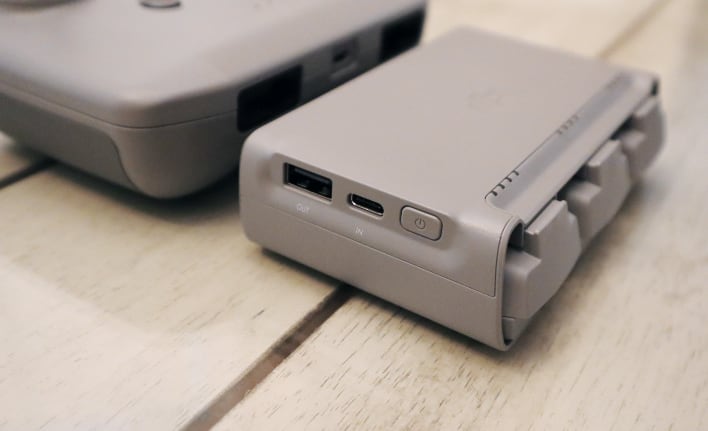 Finally, we come to the batteries, which are inserted into the Mini 2 via a rather flimsy upward swinging door on the back of the drone. Not only is the plastic door incredibly thin, but it wobbles a bit when you open it – we have a feeling that this could be a quick failure point for the drone. The batteries slide in and lock into place, after which you close the door.

Our review sample was the “Fly More Combo” which came with three batteries along with a three-bay USB-C charging dock, a very short USB-C to USB-A charging cable, and a wall adapter. The charging dock has the same solid feel as the controller, and features four LED indicators for each battery to show what the current state of charge is. On the left side of the charger is a power button (to quickly see the current battery charge state of each battery), the USB-C input, and a USB-A output for charging another device.

Flying The Mini 2 With Its Photography And Videography Chops

If you have experience with other DJI drones, the Mini 2 doesn’t stray too far from its winning formula of a well-thought out app and easy-to-use controls. In the case of the Mini 2, it uses the same DJI Fly app as the Mavic Air 2. Given that the Mini 2 is so new, we weren’t presented with any automated prompts to update the firmware on either the drone or the controller – so we were able to jump into the action right away.

The lightweight design made it easy to pick up the Mini 2 and take it with me on-the-go. And getting into the air is as easy as tapping and holding the "Takeoff" button with the DJI fly app. Once you start flying, however, you quickly see where the money was saved to get the Mini 2 down to its relatively low price point. There are no obstacle avoidance sensors included, so you'll need to be very careful when flying in tight spaces, or else you end up with broken propellers, or worse. 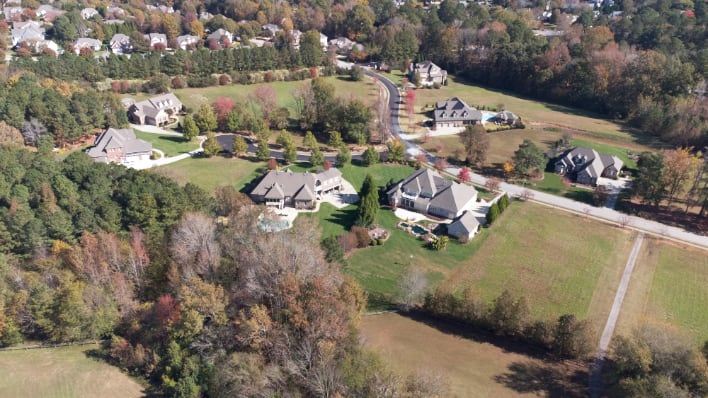 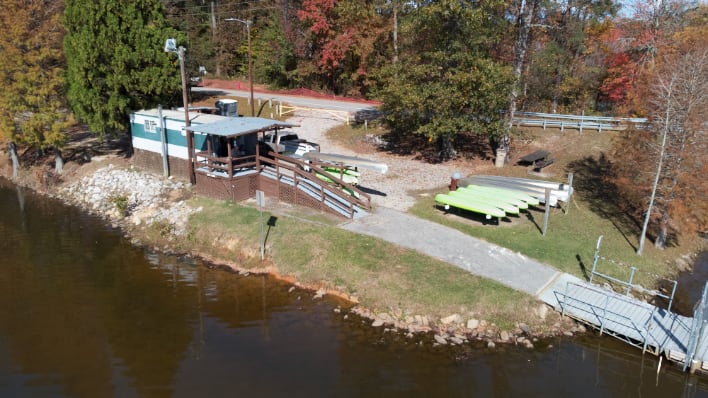 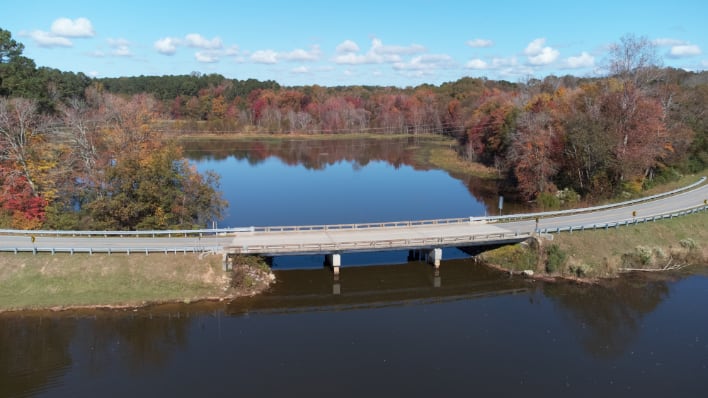 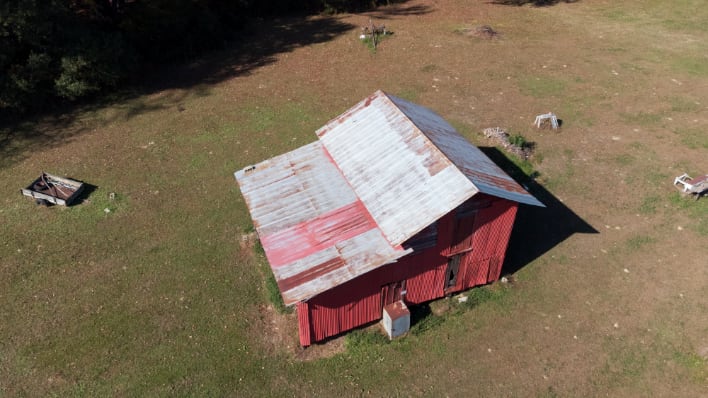 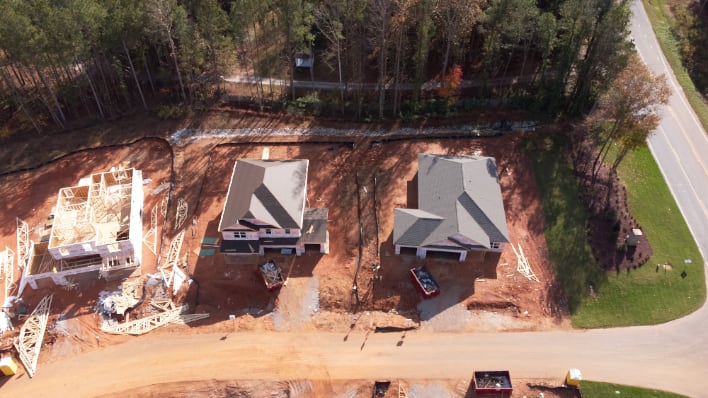 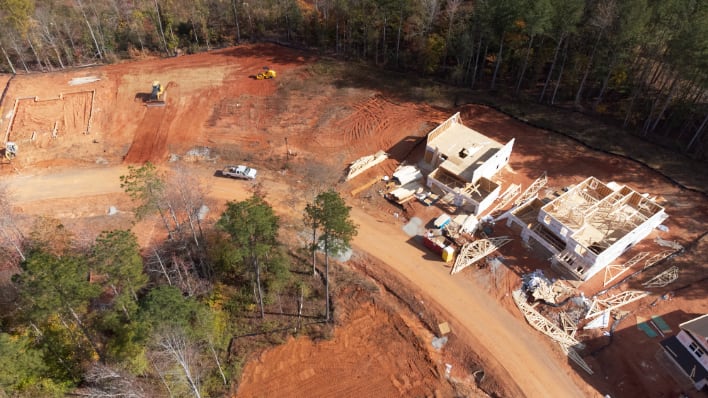 The Intelligent Flight modes are also missing, which means that the Mini 2 can't track you or other objects as it flies around. There are also no HyperLapse shooting modes available; but you can't expect to get all of that in a drone that retails for hundreds less than the Mavic Air 2.

With that being said, we greatly appreciated the additional range of the OcuSync 2.0 transmission technology in the Mini 2. At home, where I'm surrounded by dense woods, signal cutouts occurred after about a mile (slightly less than the Mavic Air 2). In wide open park areas and over water, I was able to get out to a distance of about a mile and a half to two miles before I started to get a little antsy and brought the drone back in to safety. The drone can stay aloft for 31 minutes according to DJI, and we had no trouble hitting that mark if we stayed out of Sport Mode.

As for the video and photos taken by the Mini 2, for this price point, there’s little to complain about. Image quality is about what you'd expect from a 1/2.3-inch CMOS sensor, but DJI now gives you the ability to shoot JPEG+RAW, which is a great bonus. The camera is stabilized by an excellent 3-axis gimbal, which was generally smooth in its operation. The Mini 2 can also now shoot up to 4K video at 30fps (seen above), which is a nice upgrade from the Mavic Mini, which topped out at 2.7K at 30fps. The Mini 2 can also shoot at 2.7K/30p and 1080p/60p. You can see our photos and 4K video above.

The DJI Mini 2 represents a nice generational bump over its predecessor, and rights many of the perceived wrongs that plagued the original Mavic Mini. The DJI Mini 2 is priced at $449 (a $50 increase over the Mavic Mini) and comes with the drone, a single battery, the controller, and four extra propellers. The $599 Fly More Combo includes three batteries, a three-bay charging dock, 12 extra propellers and a soft carrying case. Considering that the Mavic Air 2 starts at $799 ($988 for the Fly More Combo), the Mini 2 represents a great bargain for beginning flyers that want a competent drone platform that is 4K capable. You'll miss out on the obstacle avoidance features and some of the more advanced flight modes, but we can't argue with the excellent value proposition offered here. If you're new to drone flying or just want to get into it with a modest investment, the DJI Mini 2 is a great place to start.