Zotac shared the full tech specs of its recently launched GeForce RTX 4090 AMP Extreme AIRO graphics card in the wake of NVIDIA’s barnstorming GeForce Beyond announcements. Not all of NVIDIA’s Ada Lovelace GPU partners have been so revealing, but an eyebrow raising nugget of information about the bundled power cable was revealed at the bottom of Zotac's extensive specifications table – its service life is limited to just 30 mating cycles.
The adaptor bundled by Zotac (pictured below with other accessories) is a quad 8-pin to single 12VHPWR cable. It is designed to effortlessly feed this substantial GPU with 450W of power and is capable of up to a steady 600W if headroom is needed by those dabbling in overclocking. A connector service life of just 30 mating cycles sounds breathtakingly short, but how many among us need to plug / unplug a graphics card power cable that often? Only perhaps reviewers and competitive overclockers might swap GPUs often enough to ‘hurt’ over the period of a typical GPU’s life. Zotac bundles this adaptor for those with older power supplies to use, which might not feature a native 12+4 pin connector. 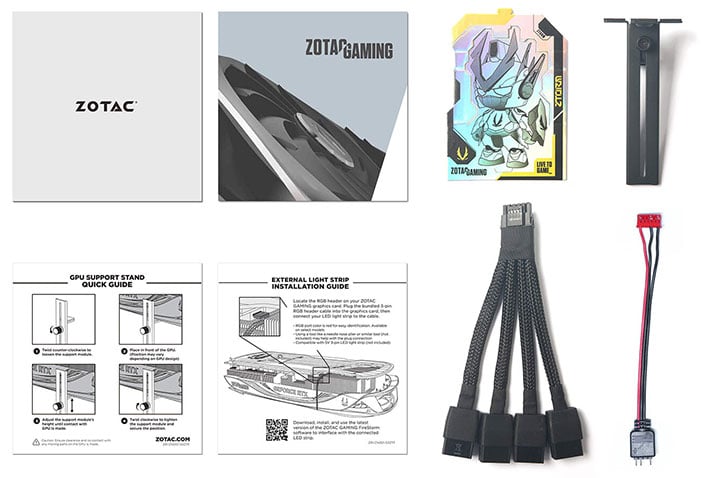 Some might point out that connector documentation for any Molex connector over the last 20 years will advise of this same 30 mating cycles durability limit. However, there is more to this Zotac notice than that. A recent report published by NVIDIA, as a member of the PCI-SIG, has highlighted failures in 12VHPWR power cable adaptors after about 40 cycles. The failures aren’t limited to ‘no power’ type events, some cables in the test batch had hotspots or even melted after getting towards 40 mating cycles. Thus, Zotac's statement of 30 mating cycles in its specs sounds like it is applying a sensible level of margin to its warning.
The news could be worse, at least it should be pretty easy and relatively cheap to get a new adaptor cable when your old one creeps worryingly close to 30 mating cycles. Also, this is another warning to PC DIYers and upgraders—be careful with your connectors when assembling and/or upgrading your PC, and you might enjoy a little better longevity, reliability, and safety over its lifespan.