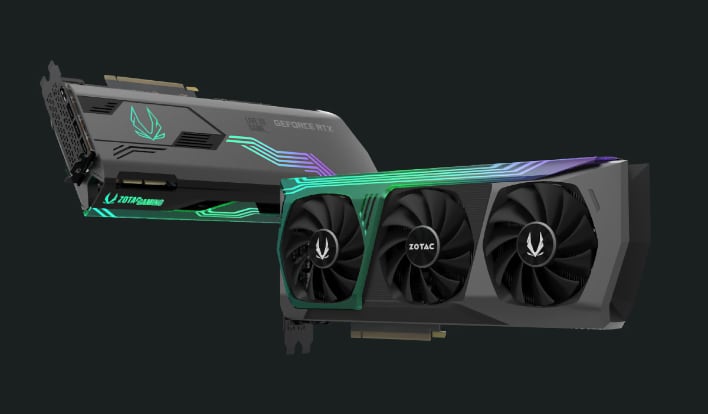 We’re still more than a few days away from NVIDIA’s planned unveil for its GeForce RTX 30 Series of Ampere graphics cards, but it appears that one of the company’s OEM partners just couldn’t wait to spill the beans. That fortunate [or unfortunate depending on how you want to look at it] company is Zotac, which leaked its entire lineup consisting of GeForce RTX 3070, RTX 3080 and RTX 3090 graphics cards.

The first hints of the leak came from momomo_us, who posted a Zotac page with the product names listed, but without any images filled in. Since that time, the floodgates have opened and numerous images of the graphics cards have been discovered. The card pictured above, for example, is the GeForce RTX 3090 Trinity HoLo, which includes a sweet triple-fan setup along with RGB lighting.

Not only are we looking at an incredibly stout cooler arrangement, but just look at the beefy backplate as well. Subsequent images obtained by @sfdxpro give us a look at the massive heatsink and heatpipe setup.

It appears that all of Zotac’s GeForce RTX 3090 and RTX 3080 graphics cards feature a triple-fan setup, while the entry-level GeForce RTX 3070 SKUs are stuck with a dual-fan setup (and are much more compact as a result).

At the moment, these are the rumored specs for the initial trio of Ampere cards that will arrive next month:

We have to caution that these are the rumored specs for NVIDIA's Founder's Edition cards, and it's highly likely that individual OEMs will play around with base/boost clocks to further differentiate their products. All of the Ampere-based GPUs are based on a 7nm process node and we're expecting some huge performance improvements over current-generation Turing-based graphics cards, which are now roughly two years old. We're also eager to see what kind of improvement shave been made to the RT cores to improve real-time ray tracing performance, which can seriously burden lower-end Turing cards when enabled.