Yahoo is getting into the business of mobile phone service as an MVNO, which stands for Mobile Virtual Network Operator. MVNOs piggyback on the networks of major wireless carriers—in this case, Yahoo Mobile operates on Verizon's network—and they often charge cheaper rates than going through one of the big four directly.
Some of the more popular MVNOs include Cricket Wireless (AT&T), Metro (T-Mobile), Straight Talk (AT&T, Sprint, T-Mobile, and Verizon), and Virgin Mobile (Sprint), to name just a few of the many offerings. More recently, ISPs have been joining the fray. Charter Communications, for example, sells a Spectrum Mobile service and Comcast offers Xfinity Mobile, both of which connect to Verizon towers.
Yahoo Mobile is also tapping Verizon's 4G LTE network. The pitch to consumers is they can enjoy unlimited streaming, texting, and talking for $39.99 per month. Yahoo promises to never slow down service based on a customer's data usage, though if the network gets congested, it may "slow down for a bit." According to Yahoo, this practice is "common for any person on any carrier." So the usual caveat applies.

"We’re built for life on the go. Which means you’ll typically experience 4G LTE network download speeds of 5-12 Mbps and upload speeds of 2-5 Mbps. Video typically streams at a resolution of 480p—nice and crisp on your phone. Heads up: when the network gets congested your data could slow down for a bit (it’s normal)," Yahoo states in its FAQ section.
Customers who want to sign up will need to have a Yahoo account. When signing up for phone service, users get their accounts upgraded to Yahoo Account Pro and Yahoo Mail Pro, both of which are subscription services. 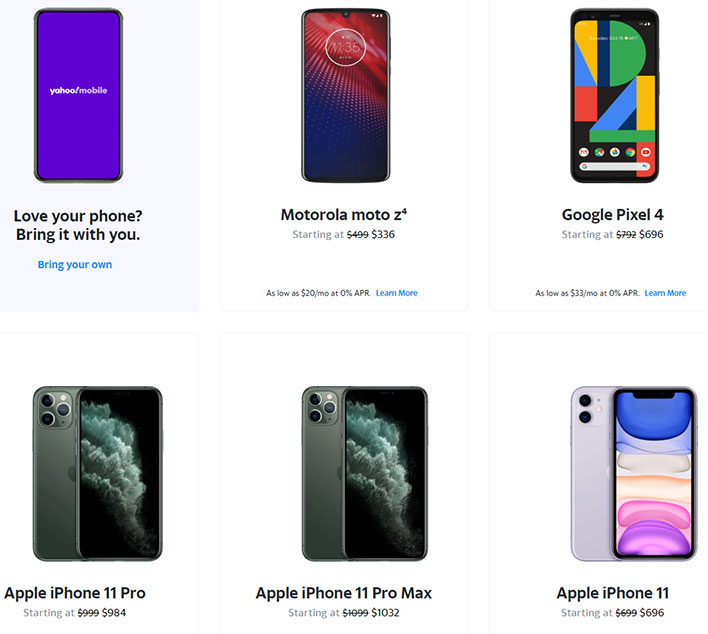 Users can bring their own compatible phone and sign up for service only, or buy a phone through Yahoo at slightly discounted rates. Those who qualify can break up the cost of the phone into monthly payments. An iPhone 11 Pro Max, for example, starts at $1,032 (plus tax) for the 64GB model, which can be paid outright or in monthly chunks of $45.
The selection is somewhat limited at the moment. Samsung's newest generation Galaxy S20 series is noticeably absent, and so is most of the Galaxy S10 series, save for the Galaxy S10e.
Some of the other phone options include Google's Pixel 4 and Pixel 4 XL, Motorola's Moto G7 Power, and over a dozen Apple iPhone handsets.
Yahoo Mobile is available now, and looks like a decent option. It has Spectrum Mobile beat by $5 per month on the unlimited front. However, it does not offer a per-gigabyte plain like Spectrum Mobile does, for those who don't plow through a lot of data. Spectrum Mobile lets customers sign up for 1GB of data at $14 per month. So, shop around depending on your needs.