A new report is claiming that Verizon is very unhappy with the current deal it has in place with Google to sell Pixel smartphones. The Pixel series of devices hasn't been a strong seller for Verizon, according to reports. A source claiming knowledge of the carrier's plans says that Verizon has put any plans to sell new Google Pixel smartphones on hold. The source gave no specific reason why Verizon was canceling the deal, but the sales issue is the leading assumption.

The source, cited by Android Police, said that the chance of the rumored Pixel 4a coming to Verizon is zero. The source claims it's far too late for Verizon to change its mind on that device at this point. There is a chance, however, that the Pixel 5 could turn up at Verizon because there is enough time for the carrier to change its mind. However, right now Verizon reportedly has no plans to sell the next-generation Google smartphone. 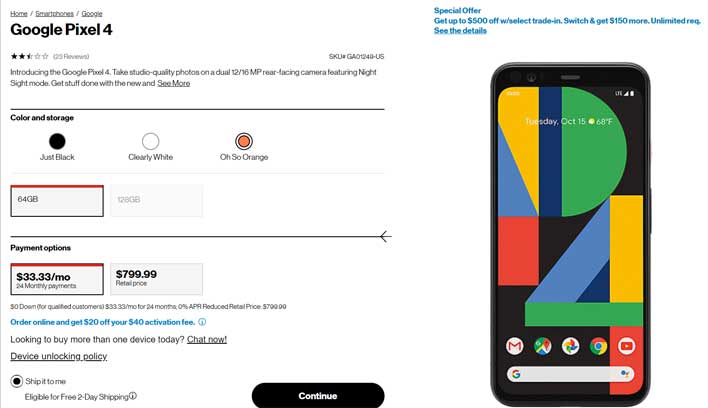 Google has been facing challenges with its Pixel devices, with sales in the United States coming in much lower than competing devices. Verizon's decision will be a blow to Google's smartphone aspirations as the carrier was reportedly Google's top partner. And Verizon has been responsible for most of the advertising for the Pixel line of devices.

One major question, assuming the source is correct, is what sort of effect Verizon deciding to no longer sell the Pixel devices will have on Google's hardware division. There's always a chance that this move is a way for Verizon to get better pricing on the smartphones. The assumption would be that losing Verizon as a partner would certainly have an impact on how Google approaches the smartphone market.

Perhaps the search giant will take a hard look at its Pixel line and try to address the issues that make the hardware difficult to sell against other devices on the market. Google has made no official comment on the report at this time, and the Pixel line of devices will still be available for fans via other retailers. Google has also had a history of bad updates that anger users, Pixel 2 owners had a camera failure after a recent update was issued.

Updated 2/20/2020 @ 1:22pm
Verizon has since issued a statement categorically denying Android Police's report: "There's no truth to this story. Verizon continues to work with Google and looks forward to the new portfolio of devices."