Here's Why Sprint Will Fix Your Samsung Galaxy's Broken Screen For $49, Regardless Of Carrier 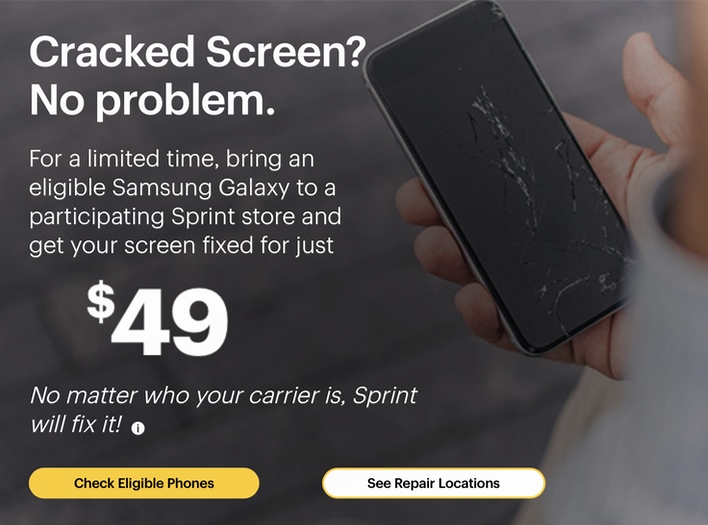 Most people have been there at some point; you accidentally drop your smartphone, and the screen shatters. In years past, sometimes that meant it was time to upgrade to a new smartphone and toss the cracked phone in a drawer. With the price of smartphones soaring today, most people opt to fix their devices. Sprint has a deal going on screen repair right now specifically for Samsung Galaxy devices.

Sprint will fix the screen on a Samsung Galaxy smartphone for just $49 -- regardless of which carrier you use. That is much cheaper than a regular screen repair costs, often at $100 or more. The fine print says that Sprint will only repair screens at stores with service and repair centers, and that not all devices will be repairable. There are even reports that Sprint is replacing each phone's battery with a brand new one during the repair process, which is especially good news for those with older devices.

Only one screen repair is offered at the $49 price, and the deal is only good through February 9. Eligible devices for screen repair include the Galaxy S7, S8, S8+, S9, S9+, and Galaxy Note 8. The new Galaxy 10 devices aren't eligible. For smartphones that can't be repaired, Sprint will give offer users a $150 credit towards a new phone. And hence the real purpose of this deal. Sprint likely wants to get heavier foot traffic to its stores, and is looking to snap a few customers that otherwise wouldn't think to choose it as a carrier. Getting through the door is the first step, then enticing them with trade-in offers and low-priced is the logical next step.

The caveat to the credit is that it's not instant and is applied within two bill cycles to the user's statement. Devices eligible for the buyback include the iPhone 6s and higher and Galaxy S5 and higher. Sprint is offering unlimited data, talk, and text plan for $35 monthly for users who trade-in or buy a new phone. Sprint Unlimited Plus is $20 monthly per line for those who bring a phone or buy one outright. The carrier is also covering switching fees up to $650 per line.