Seagate is rumored to be readying a smaller 512GB Storage Expansion Card for the Xbox Series X|S, so owners of Microsoft's latest-generation game consoles can give themselves more wiggle room at a lower price than the current 1TB option. And like the 1TB model, this would give gamers the full speed capabilities of the Xbox Series X|S and its Velocity Architecture.
As it stands, the Xbox Series X offers up around 802GB of usable storage from its internal NVMe solid state drive (the rest is reserved for the operating system and various system files). On the Xbox Series S, the amount of usable storage is around 364GB. Some of the bigger games (Call of Duty, anyone?) can quickly chew into the available space.
Microsoft had the foresight to build an expansion port into the Xbox Series X|S, and has teamed up with Seagate to offer third-party storage that is capable of tapping into the Velocity Architecture API. And unlike going the USB 3.1 route, you can install games directly to the expanded storage. Being able to use off-the-shelf SSDs would be even better, but it's not an option.
Here's the catch—Seagate's 1TB Expansion Card costs $219.99. That is a bit pricey. It is also the only capacity Seagate is offering at the moment. However, rumor has it that is going to change in the near future. A retailer in France recently listed a 512GB model that has not yet been released or even announced by Seagate. Have a look... 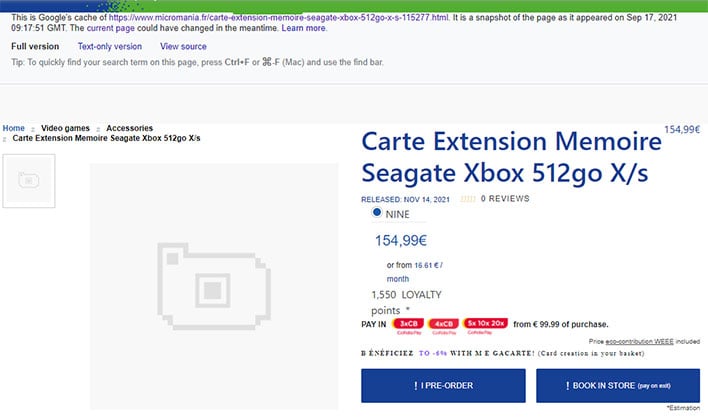 The listing no longer appears on the retailer's website, but a cached copy of the 512GB card doesn't lie. According to what the listing said when it was live, the price is set at 154,99€, and it releases on November 14. So perhaps expect an announcement in the coming weeks.

Regarding the cost, that coverts to around $182 in US currency, though a straight conversion is not how manufacturers typically price their components and hardware from one territory to the next. For example, the same retailer sells the 1TB model for 214,99€, which works out to around $252 in US currency, though it actually carries a $219.99 MSRP.

If using that as a blueprint, a 512GB Seagate Expansion Card might cost $159.99 in the US. Thereabouts, anyway. Still a pricey option, in terms of bang for the buck (a fast 512GB SSD can be hard for around $50), but around $60 less expensive than splurging on the 1TB model.
The timing here is interesting, in that Sony just rolled out a system update for the PlayStation 5 that allows users to install third-party SSDs into the system's NVMe slot. Compatible SSDs must be rated to achieve a sequential read speed of 5,500MB/s or higher, and Sony also recommends ensuring it either comes with a heatsink, or that buyers scoop one up.