A few weeks back, we brought you the news that a cheaper, 512GB version of the Seagate Storage Expansion Card for the Xbox Series S and Series S is on the way. The initial tip came from a product listing at a French retailer, which priced the expansion card at 154,99€, or around $180.

Today, we have further confirmation that the smaller and cheaper SKU is coming courtesy of Window Central. The publication says that a source provided an image of the retail shelf placard for the 512GB Seagate Storage Expansion Card. Unfortunately, the anonymous tipster didn't say which U.S. retailer spilled the beans on the new accessory. Still, we'd imagine that it will show up at the usual suspects like Best Buy, Walmart, Target, and GameStop (among others). 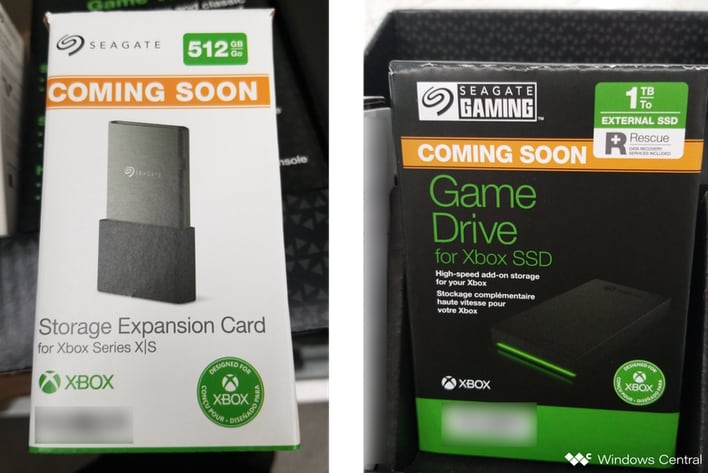 Microsoft currently sells a 1TB version of the expansion card with a retail price of $219.99. It is currently the only way to expand the high-speed SSD storage on the Xbox Series X and Series S. Sony's PlayStation 5 allows you to use just about any PCIe 4.0 SSD that meets its minimum 5,000MB/sec read speeds. Still, you'll have to crack the chassis open to install it and make sure that you put a heatsink on the SSD to keep temperatures in check.

Of the two options to boost current-generation console storage, Microsoft's solution is the more straightforward, albeit proprietary, option. We estimate that the 512GB SKU could ring in at around $159, making it about $60 cheaper than its 1TB counterpart. However, that is still a rather hefty price to pay to stretch the storage of the Xbox Series X and Series S, which come with 1TB and 512GB, respectively, of internal storage. For example, a 500GB Samsung 980 Pro PCIe 4.0 SSD, which you can use in the PlayStation 5, sells for $109. The 1TB version will set you back $178.84.

For those that have an Xbox Series X/S, have you already sprung for the existing 1TB expansion card? If not, would you opt for one or the new upcoming 512GB version in the future?