Back in 2005, Microsoft teamed up with ATi, now part of AMD, for the graphics processor in the Xbox 360. In the 15 years since, the two companies have cozied up to form a console alliance for the ages. That's a relationship, Microsoft says, that affords it a closer alignment with AMD's RDNA 2 architecture than its rivals at Sony. As a result, the Xbox maker claims that its Xbox Series X and Series S make use of AMD's graphics tech in a way that the PlayStation rivals at Sony just can't match. Considering both consoles use the same combination of Zen 2 CPU cores and RDNA 2 graphics tech, this is a pretty bold claim to make.

What does seem to be proprietary to Microsoft is the way it leverages RDNA 2. In a post on the Xbox blog, Microsoft technical fellow Andrew Goossen and Director of Program Management Jason Ronald detail a host of unique ways that Xbox exclusives will use AMD graphics tech in novel ways. First of all, the Xbox team is all aboard the Machine Learning buzzword express. This goes beyond just enemy AI, too. Microsoft is using ML to improve animation and visual fidelity. While the post doesn't explicitly say so, using ML to figure out what parts of a scene can exploit Varialble-Rate Shading (VRS) for better performance seems an obvious choice. 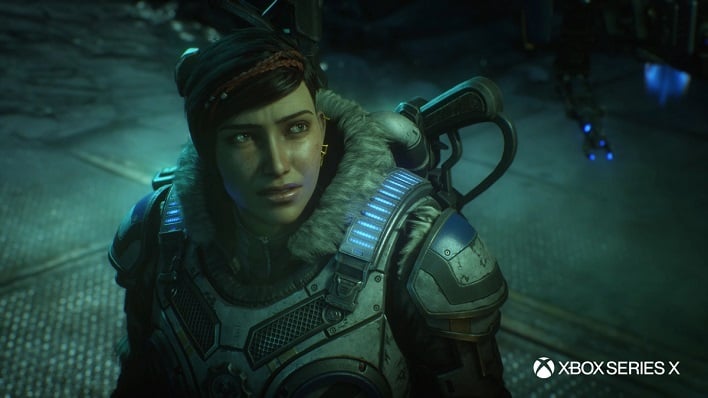 Speaking of VRS, the blog post details that the next gen Xbox realizes a 15% performance uplift by optimizing shading rates in coming Xbox Series X ports of games like Gears 5. Microsoft has previously shown off the last Gears game running at an incredible 120 frames per second at 1080p on the lowly $299 Xbox Series S. If Microsoft is able to hit those promised frame rates and improve visual fidelity with a combination of machine learning and VRS, we're all for it.

We already know the big headline features of AMD's RDNA 2 graphics tech, which will be the heart of the Radeon RX 6800 and 6900 series of graphics cards. If you're not up to speed on the Red Team's latest graphics innovations, like DirectX Raytracing, the aforementioned VRS, and the Infinity Cache, be sure to hit up our primer for all the details. While these features are core to RDNA 2, and therefore not off the table for Sony to use, Microsoft says its long history of AMD-equipped console hardware gives it the edge.

Optimizing these features with the help of machine learning could give Microsoft an extra leg up in the next leg of the console wars.  Hopefully those ML optimizations will make their way into the PC versions of its Xbox-exclusive titles. Those games should also make good use of Microsoft's Direct I/O optimizations for decreasing load times, same as the Xbox. Faster loading might be the most welcome part of the new console generation. The Xbox Series X and Series S launch on November 10, so we'll no doubt see more of Microsoft's RDNA 2 optimizations then.