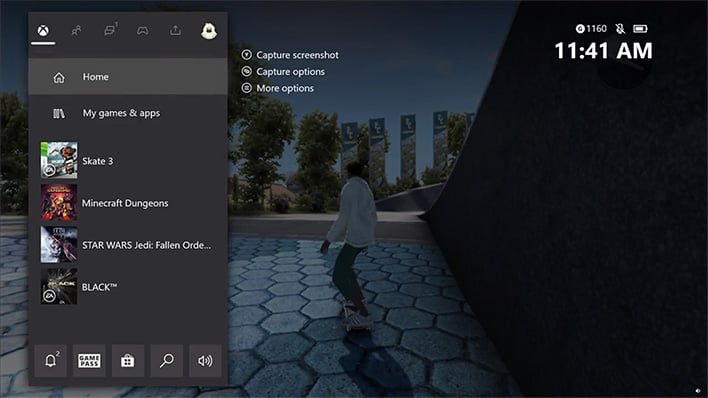 There are so many things to like about Microsoft's upcoming Xbox Series X and Xbox Series S game consoles, just based on the specifications, list of features, and everything else that has been revealed so far (including pricing). One of them is the Quick Resume feature, a potential game changer, if it works quickly and seamlessly, as shown in a new video highlighting the functionality.
What is Quick Resume? As Microsoft had previously demonstrated, it is a feature that allows players to resume multiple games from a suspended state. Picture this—you're playing a single-player game when suddenly your buddies start pestering you to play Modern Warfare. Quick Resume allows you to essentially pause your current game wherever you are at, switch to another game, then switch back and resume where you left off.
That is just one scenario. Maybe you want a change of pace, or are getting frustrated with a particular section of a game, or stuck on a puzzle. Quick Resume makes it easy to jump into another game, and then back to the one you needed a temporary break from, without having to dash to a checkpoint or otherwise save your progress. Pretty neat, in theory.
How does it work in practice? Pretty fast, from what we can tell. Have a look...

The video uploaded to Reddit shows the Quick Resume feature in action on an Xbox Series S console, which is less powerful than the Xbox Series X, at least on the graphics side. There is not much of a downgrade to the CPU (just slightly lower clocked, but still an 8-core Zen 2 chip), and the storage subsystem is identical, meaning the Xbox Series X reaps the benefits of Microsoft's Velocity architecture, and NVMe SSD storage.
In the demo, we see the player log some time in Star Wars Jedi: Fallen Order, then pausing and using Quick Resume to hop into Minecraft Dungeons. From there, the player later jumps into Skate 3, followed by Black, and then back into Star Wars Jedi: Fallen Order. Each time, the transition is quick, with hardly any load time. It is sort of like Alt-Tabbing through windows and programs in a Windows PC.
The one caveat is that all of the titles shown are Xbox One games. Will more demanding games built for the Xbox Series X take a bit more time? We will have to wait and see, but what we have seen so far is certainly encouraging.