You know what they say about beauty—it is in the eye of the beholder. And depending on your eye, the Cyberpunk 2077 themed Xbox One X console either looks delightfully tough and tumble, or is a weathered mess. There is probably not a whole lot of middle ground, but either way, you can form your own opinion by spying a bunch of actual photos (read: not renders) of the Xbox One X Cyberpunk 2077 Edition game console.
These are challenging times we find ourselves in, and had the situation been different, CD Projekt Red would have held a Night City Wire event this week. However, the developer/publisher decided to push it back until later this month. In the meantime, pictures of the themed console that ties into the developer's upcoming (and highly anticipated) Cyberpunk 2077 game have found their way to the web.
Reddit user Arasaka posted a whole bunch of them on Imgur.

It looks a little bit like a used console, though not necessarily in a bad way. Again, that will depend on your perspective. But as you can see in the closeup above, there is some intentionally chipped paint around the power button and various edges.
In case you somehow missed the hoopla up to this point, Cyberpunk 2077 is a first-person role playing game by the same developer that made The Witcher series. It takes place in a dystopian city (Night City) with an open world design and a half a dozen regions.
The console depicted is part of a limited edition bundle with 1TB of storage. It is not yet available to pre-order, but some players have already gotten their mitts on one. 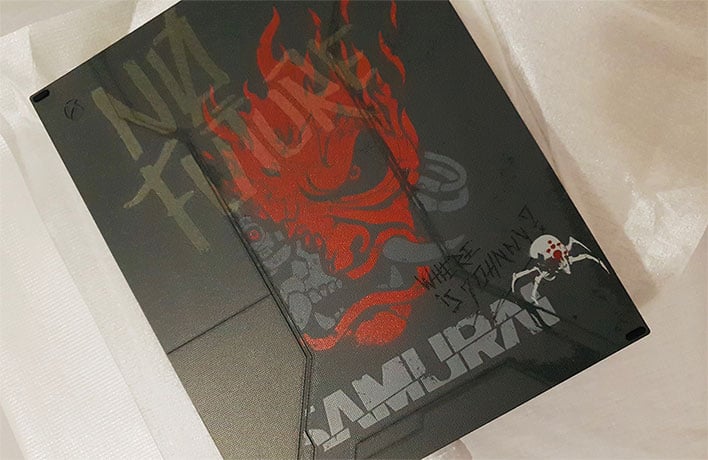 It features glow-in-the-dark lettering (the "No Future" text in the above photo), laser etchings, a red LED on the front, custom panels, and a themed controller, which will be made available as a standalone purchase for people who already own an Xbox One X. 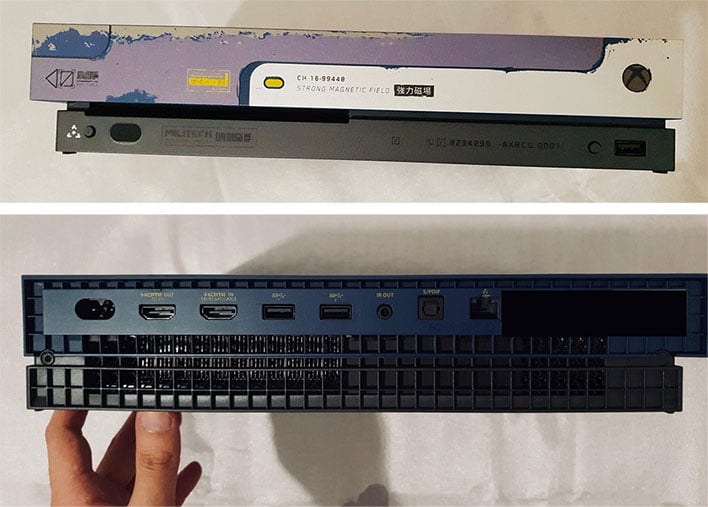 Though the themed console has started to arrive, the game itself is set to release in a few months, on September 17, 2020. The game (sans console) is available to pre-order for Xbox One, PlayStation 4, PC, and Stadia.
Images Source: Reddit (Arasaka)