Microsoft has suddenly become rather forthcoming about its Xbox Series X retail launch, having announced pricing, when exactly it will land on store shelves, and even unveiling a disc-less Xbox Series S with the same CPU inside, and an aggressive price to boot. At the same time, however, Microsoft let it be known that its Xbox Game Pass for PC service is about to double in price.
Xbox Game Pass for PC is currently in beta, and if you sign up now, you can still take advantage of the $1 introductory offer, to cover your first month of membership. That offer stands until next week, ending on September 17.
During the beta period, the price would normally be $4.99 per month after the initial introductory offer. And that will still be the case for one additional month, as Microsoft states on Twitter that "if you're already a member, you'll pay the same rate through the next billing cycle." But after that, it jumps to $9.99 per month in the US (pricing varies by region).
While that will not sit well with everyone, the price hike represents the service's shift out of beta. According to Microsoft, the Xbox Game Pass community is now over 10 million players strong, all who have access to over 100 games on console, PC, and mobile. In addition, Microsoft has teamed up with Electronic Arts to provide Xbox Game Pass Ultimate and PC members with an EA Play membership at no added charge, so that's a nice perk.
The other wrinkle to all this is the ability to essentially finance a next-generation Xbox console through Xbox All Access, which includes an Xbox Game Pass Ultimate subscription. It runs $34.99 for 24 months for the Xbox Series X ($839.76 total) and $24.99 for 24 months for the Xbox Series X ($599.76). So there you go.

One thing Microsoft has not done yet is formally unveil any press renders of its retail boxes for its next-gen consoles. That's okay, because @Wario64 picked up the slack by spotting renders at a French retailer, as seen at the top of this article, and below with the packaging arranged in an "X" formation... 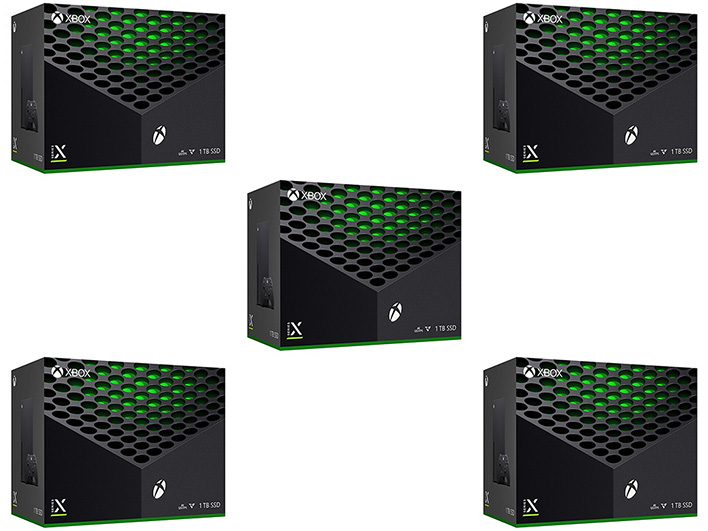 Mind blowing stuff, eh? Maybe not, but it is still neat to catch a glimpse ahead of the console's launch in November. We can see Microsoft touting 4K at 120 FPS, along with a 1TB SSD and the logo for its Velocity architecture on the box, which is the secret sauce for how developers can take advantage of the faster storage in this generation's console.
Pre-orders for the Xbox Series X ($499) and Xbox Series S ($299) will begin on September 10. Both will be available two months later, on November 10.