Microsoft's communications lead, Frank. X. Shaw, provided some rare insight into the subscriber numbers for Xbox Game Pass, the nifty game subscription service for Xbox One consoles and Windows 10 PCs. Bolstered by "record engagement" this quarter, Xbox Game Pass hurdled over the 10 million user mark, Shaw stated in a Twitter post.
That's a big number and certainly a brag worthy achievement. Of course, we can't overlook that a deadly pandemic contributed to record engagement this past quarter. But if looking at the glass half full, this shows that gaming is providing refuge from going stir crazy amid the call for social distancing to stop the spread of the virus.
This is also an impressive milestone to hit after less than three years. Xbox Game Pass launched in June 2017 (Xbox Live Gold subscribers got access a tad earlier), while Xbox Game Pass for PC (still in beta) has only been around since June of last year.
Since launching, Microsoft has made some changes to the service, like adding a Ultimate tier and fleshing the service out with more games. There are now more than 100 console and PC games, including NBA 2K20, Minecraft, Kingdom Hearts III, Grand Theft Auto V, Mortal Kombat X, Doom (2016 reboot), Rocket League, Halo: The Master Chief Collection, and many others.
There are three subscription tiers available...
All three can be had for just a buck for the first month, then the price reverts to the normal subscription cost. In addition, some hardware bundles include three free months of Xbox Game Pass for PC. The Ultimate tier costs the most, but includes an Xbox Live Gold membership and access to both console and PC titles. 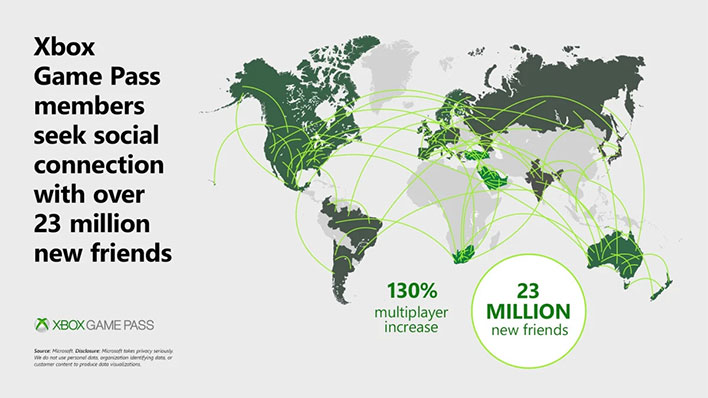 The 10 million subscribers represent 41 different countries. In a separate blog post, Xbox chief Phil Spencer said Xbox Game Pass added over 23 million friends on Xbox Live, for a 70 percent growth rate. Subscribers are also "playing twice as much and engaging in more multiplayer gaming, which has increased 130 percent," Spencer said.
It will be interesting to see how the numbers shake out once the Xbox Series X arrives towards the end of the year. Hopefully Microsoft will see fit to provided updated states on an ongoing basis.