Is there finally light at the end of the tunnel? Are we actually getting closer to the day when we can once and for all be completely done with Adobe Flash Player and have its crusty, security-plagued bits stricken from the Earth? Well, it appears so according to the folks at Adobe.

On Tuesday, Adobe issued its final update for the much-hated web plugin, which has in recent years been supplanted by HTML5 and other comparable technologies to deliver interactive content on the web. The final update is coming with the release of Flash Player 32 and AIR 32. The company waxed poetic about Flash, as we approach its execution date:

Today marks the final scheduled release of Flash Player for all regions outside of Mainland China.  We want to take a moment to thank all of our customers and developers who have used and created amazing Flash Player content over the last two decades.  We are proud that Flash had a crucial role in evolving web content across animation, interactivity, audio, and video.  We are excited to help lead the next era of digital experiences.

As the company has previously indicated, Adobe will cease support of Flash after December 31st, 2020. Just over a week later on January 12th, 2021, all Flash content will be blocked from running in Flash Player. In a somewhat humorous note, Adobe says that it "strongly recommends" that all users uninstall Flash Player to "help protect their systems." Even to this day, Adobe is acknowledging just what a bug-filled mess that its key piece of software has been over the years, which has led to compromised security on millions of systems.

Back in late October, Microsoft did its part to rid the planet of Flash by releasing an official tool (via KB4577586) to completely remove the player from Windows PCs. “Beginning in January 2021, Adobe Flash Player will be disabled by default and all versions older than KB4561600 released in June 2020 will be blocked," said Microsoft back in early September. "Downloadable resources related to Adobe Flash Player that are hosted on Microsoft websites will no longer be available.” 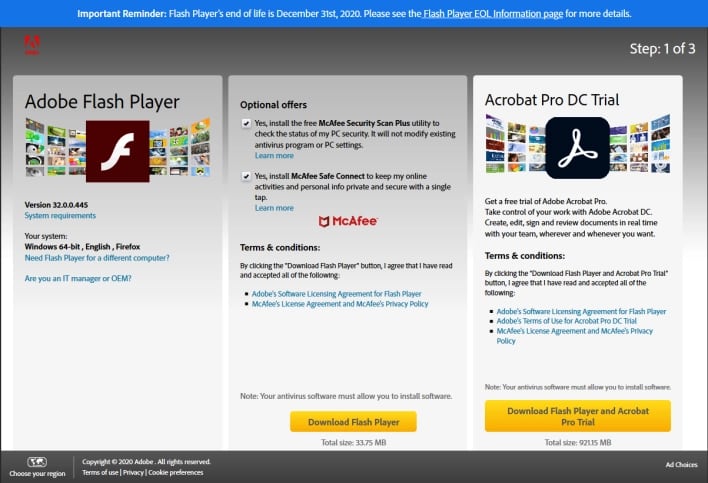 The demise of Flash has been over a decade in the making, and we can credit former Apple CEO Steve Jobs with being one of the primary catalysts to get the ball rolling. Jobs penned an open letter in April 2010 entitled "Thoughts On Flash". In it, he railed against the software, talking about its proprietary nature (which is rich, coming from Apple), security woes, and battery-hogging tendencies (among others):

Flash was created during the PC era – for PCs and mice. Flash is a successful business for Adobe, and we can understand why they want to push it beyond PCs. But the mobile era is about low power devices, touch interfaces and open web standards – all areas where Flash falls short...

Symantec recently highlighted Flash for having one of the worst security records in 2009. We also know first-hand that Flash is the number one reason Macs crash. We have been working with Adobe to fix these problems, but they have persisted for several years now. We don’t want to reduce the reliability and security of our iPhones, iPods and iPads by adding Flash.

It's a shame that it has taken over 10 years for the Flash Player to officially be put out to pasture, but we can take pleasure in the thought that it will die a lonely and miserable death.