Windows 11 Update Delivers File Explorer Tabs, A Better Taskbar And These Other Features

Microsoft rolled out the latest major update to Windows 11 with the 2022 update in September. On October 18th, the Redmond giant unlocked a number of highly anticipated features for those who have already installed it.

Quite possibly the most anticipated feature now unlocked is File Explorer tabs. The feature is super useful for keeping your desktop space squeaky clean. From our perspective, though, there are still a couple of creature comforts missing that have existed in browsers for some time now. Yes, you can absolutely drag files between tabs to use them to move but you cannot detach tabs or merge tabs by dragging them between windows. Still, it's definitely a nice feature addition.

The latest 2022 update restores another feature that has been missing from Windows 11 since its launch—The taskbar finally has right click task manager menu again. This is part of the new overflow interface we talked about back in July. 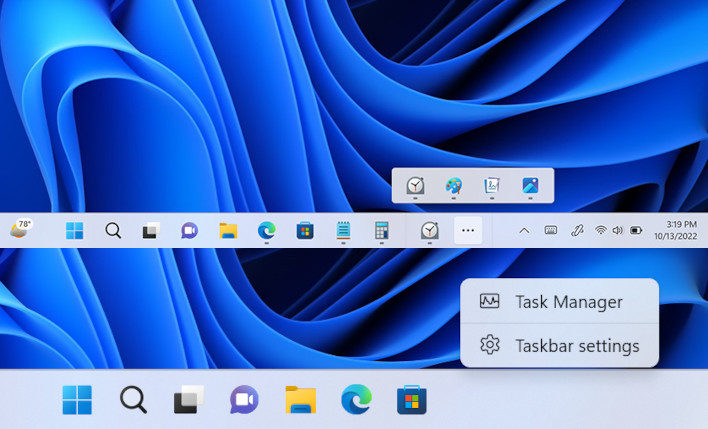 Screenshot of Taskbar Upgrades in Windows 11

There have been some notable additions to the Microsoft Store, too. iCloud users may be happy to hear that iCloud for Windows is now available for Windows 11 on the Microsoft Store. Also, Android fans can now run Android Subsystem for Windows on their Windows installation without needing a preview build of Windows. This allows users to run certain Android apps via the Amazon App Store right within Windows.

There have also been improvements towards anticipated needs. Windows will now detect, highlight, and encourage certain types of interaction depending on the data displayed on your screen. For example, if a date appears in an e-mail, it may provide a contextual menu asking if you want to add an entry to your calendar.

The very last piece we're going to talk about is an upgrade to the snipping tool, the freely included screenshot utility for Windows. It is a super useful utility that we use all the time to grab screenshots. The biggest addition to this utility is that it now supports video capture. Very cool!


There's a lot more in the update, including accessibility improvements. In order to get this update all you need to do is check your Windows Update if you're already running Windows 11. It may not be fully available for everyone yet, but it is showing up across the board for most. The full details straight from Microsoft are available on the Windows Blog.