While Microsoft already released Windows 11 back in October and has since been rolling it out to eligible devices, the “Windows as a service” model means that, like Windows 10, Windows 11 will continue to receive relatively frequent updates with substantial changes and new features. These updates first appear in preview builds for Windows Insiders. Last week’s preview build included a new desktop watermark reminding users that their PCs don’t meet the system requirements for Windows 11.

This week’s preview build, Build 22567, contains a couple big additions along with a long list of smaller changes. The first of these additions is a credit card payment field in the Microsoft account settings. Back in October, Windows 11 received an interface for managing Microsoft 365 subscriptions. However, even with this management interface in place, users have still had to navigate to the Microsoft Account web page to enter payment information.

The new payment field in this week’s preview build means users can pay for a Microsoft 365 subscription directly within Windows. Windows will also now notify users when their payment information needs to be updated. Additionally, Microsoft has updated the subscription management interface with more subscription information, some of which highlights the “free benefits” that come with a Microsoft account. 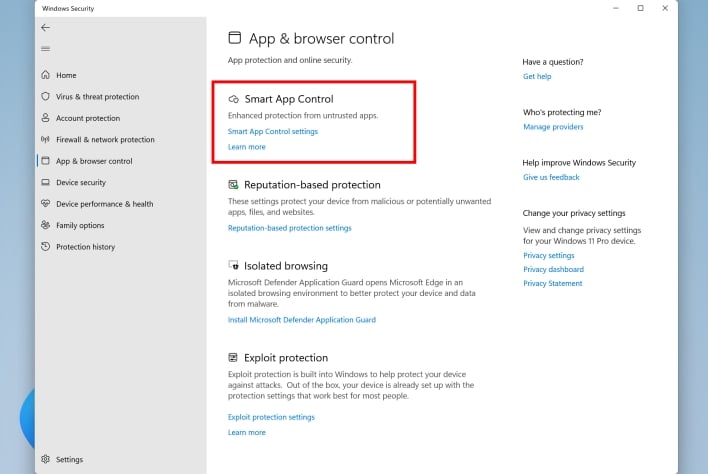 The second big addition introduced in this week’s preview build is a new security feature for Windows 11 called Smart App Control (SAC). SAC blocks untrusted or potentially dangerous applications. SAC begins by evaluating whether it can help a particular user without significantly obstructing the user experience. SAC will then automatically turn on or off based on the results of its evaluation. However, users can manually turn SAC on during the evaluation period. Microsoft says that it will share more details about SAC in the future.

Beyond these two additions, the preview build brings further changes, including an updated “Open with” dialog box that ditches the Windows 11 look in favor of Windows 11 design principles. The build includes the redesigned Task Manager that was introduced last month, but was previously available to only some Windows Insiders. Microsoft has also changed the Windows Updater to optionally draw on electricityMap and WattTime to schedule update installations for times when the local electrical grid is drawing more heavily on renewable energy.

The Windows Blog contains full update notes for Build 22567 for those who are curious.