Since Windows 11 released to the public, more and more people have begun adopting it and leaving Windows 10 behind. Android has even been said to be adopting Microsoft's latest OS, as leaks indicate Android 13 will allow users to operate Windows 11 on a smartphone. But even with so many beginning to embrace it, Microsoft is not remaining complacent with making improvements. In the latest Insider Preview Build there are a plethora of new features and improvements.

One of the newest features that may get noticed is an update to the Start menu. Microsoft says it has been listening to many of you, and that you like to customize your pins in Start by organizing them into folders. So, it has added the first version of folders in the latest Preview Build. All you need to do in order to create a folder is simply drag an app on top of another, and voila, you have a new folder. Once you have created a folder, you can add more to it, rearrange apps within a folder, and remove apps from a folder.

If you are someone that gets annoyed with notifications popping up at inopportune times, you will be happy to learn that there is also a new Focus experience. This feature enables you to keep your attention on what's important and not be distracted with pesky notifications. Focus integrates the clock app for other focus tools as well, such as a focus timer and calming music. 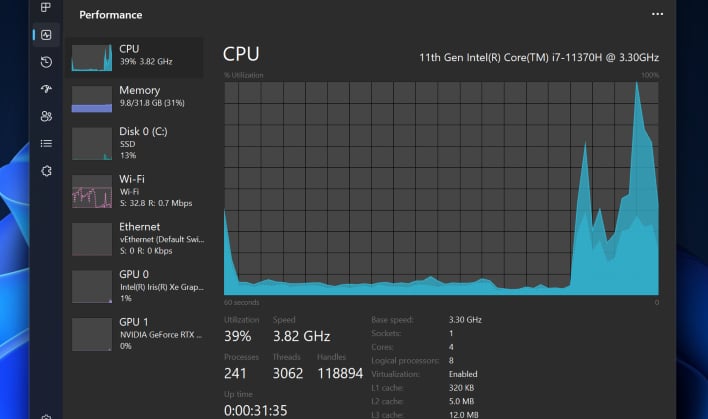 Live captions is also included in the new build. For anyone that is hard of hearing or deaf, this will provide much needed captions for any content with audio. The caption window can be re-sized, as well as being able to personalize it by applying or customizing a caption style.

For those who have a touch screen, there are 5 new touch gestures. You are able to bring up or dismiss Start by swiping with your finger from the middle of the taskbar to bring up the Start menu and then swipe back down to dismiss it. You are also able to swipe between Pinned/All apps and Recommended/More on Start, swipe to bring up or dismiss Quick settings, and swipe to invoke and dismiss Notification Center. The fifth new gesture is called "Full screen gripper", and is designed to keep you in your app if you accidentally swipe near the edges.

Task Manager is also getting some love with this Preview Build. It has been updated to match the new Windows 11 design principles. Changes include a new hamburger style navigation bar and a new settings page. There is also a new command bar on each page that allows access to common  actions. And for those who are a fan of dark mode, you will be able to implement it on Task Manager now as well (seen in picture above).

If you would like to learn about all the new features and improvements, you can head on over to the post on Windows Insider Blog. Let us know down in the comments which new feature you are most excited for.