Valve has published updated Steam Hardware Survey results for the past month and one of the interesting standouts is the uptick in Windows 11 usage. According to the latest survey data, 8.28 percent of systems pinged last month had Windows 11 installed. That's a nearly 6.5 percent monthly gain, and it propels Windows 11 ahead of Windows 7.
Before we go any further, we should point out that Steam's survey only paints a partial and sometimes inconsistent picture of the landscape. The methodology is imprecise—not all Steam users are surveyed, and there are various factors that can affect results, like increased usage (and pinging) of Chinese internet cafes, to name just one. However, the survey is the best one we have for measuring trends among gamers. 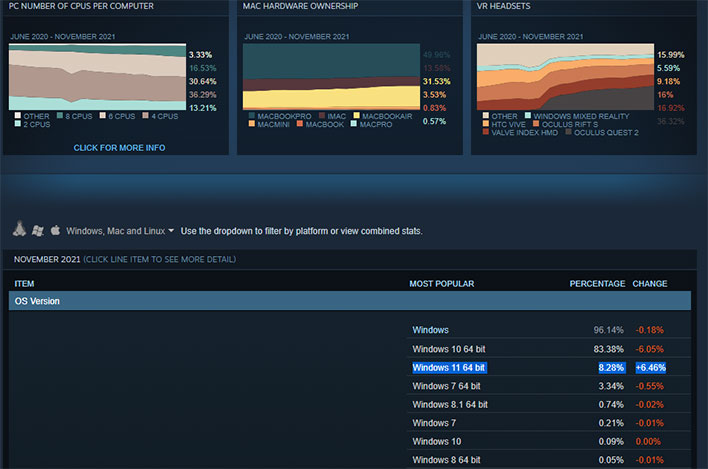 Disclaimer aside, the data is interesting. An almost 6.5 percent gain from one month to the next is pretty substantial, and it almost entirely came at the expense of Windows 10, which dropped 6.14 percent (64-bit and 32-bit combined) among Steam gamers.

There's no great mystery here, though—Windows 11 is a free upgrade for Windows 10 users, and for those with PCs that meet the requirements (including that pesky TPM 2.0 requirement), making the jump is only a few mouse clicks away. Microsoft's been pushing Windows 11 as an in-place upgrade through Windows Update. Likewise, users can download a Windows 11 ISO for a clean installation if they prefer.

Still, it shows that Windows 11 is making big strides in short order, at least among Steam gamers. Windows 11 has only been out a couple of months, and like every release before it, there have been initial hiccups in the early going. For example, a cache latency bug with AMD's Ryzen processors tanked performance in some specific instances, though fortunately that has since been addressed.
Looking at the landscape more broadly, it's tough to get a bead on where Windows 11 sits right now. The latest version of Windows doesn't elicit a blip on StatCounter or NetMarketShare, though we'll see what next month's data has to say, both within and outside of Steam's survey results.

What about you, have you made the jump to Windows 11, or plan to at some point? Let us know in the comments!