Reliable Microsoft leaker WalkingCat posted this morning that Windows 10X would launch in March but later backtracked on that statement. However, WalkingCat instead came back with a heavy emphasis on naming for Windows 10X, which is reportedly now referred to as "The New Windows." 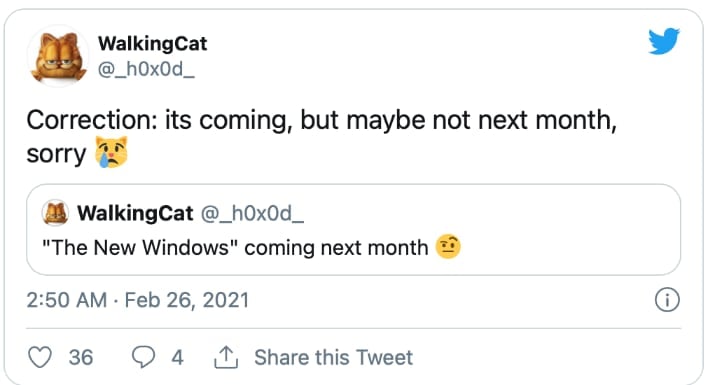 We don't know how WalkingCat came across this information, but we have no reason to doubt their sourcing. While it was assumed that Windows 10X would arrive this year, The New Windows sounds like a rather odd naming choice for the operating system. It sort of reminds us of New Coke, and we all know how well that went.

We recently saw The New Windows in action on a Surface Pro 7 convertible, but some performance hiccups were found in that early build. Its streamlined user interface appears to combine some design undertones inherent to both Chrome OS and macOS, with a minimalistic bottom dock adorned with just a few oft-used applications.

Although many rumors are surrounding The New Windows at this point, most seem to believe that it won't be able to natively run Win32 apps (like Windows 10 S Mode), but the functionality could be added later. This could make The New Windows a prime target for power-efficient devices running Qualcomm Snapdragon Arm processors.

Tell us what you think about The New Windows -- including its alleged name -- in the comments section below.