There is still about a week and a half to go before Microsoft pushes out this month's Patch Tuesday update (on October 12, the second Tuesday of this month). But if you want to shore up Windows 10 with a bunch of fixes ahead of time, Microsoft has made available its optional KB4577063 cumulative update in preview form, and it is jam packed with fixes and improvements.
Some of them are smaller in nature. For example, after updating, users still running Internet Explorer 11 will see a notification alerting them support for Adobe Flash is coming to an in December. A few of the other highlights include...
To be clear, this is not a cumulative security update, and instead is entirely focused on fixes a bunch of bugs and generally improving the way Windows 10 and some of its features work. In Edge, for example, KB4577063 fixes in a bug in IE Mode that occurs when enabling 'Configure enhanced hang detection for Internet Explorer mode' in the browser.
It also addresses an issue in Windows Subsystem for Linux (WSL). Some users have been seeing an error message that states "Element not found" when try to start WSL. If you are running into that problem, you should give this optional preview update a whirl.
By my count, there are nearly 50 improvements and fixes included in KB4577063. These range from updating the 2021 time zone for Fiji and addressing a bug that fails to recognize the first East Asian language character typed into a Microsoft Foundation Class Library (MFC) DataGrid, to fixes for Windows Defender and resolving strange characters displaying before the day, month, and year fields in the output from console commands. 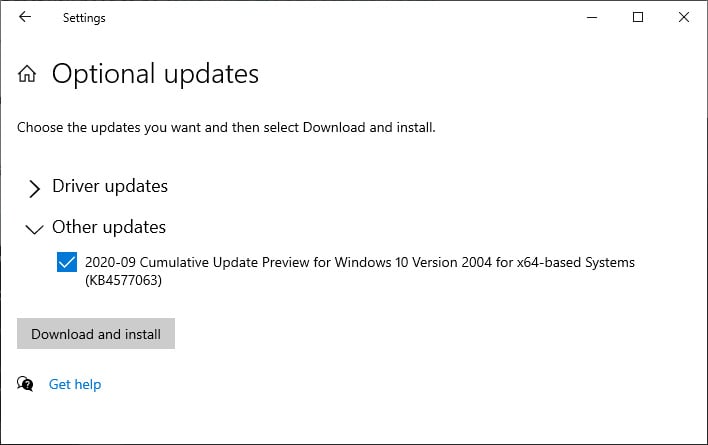 My recommendation is to browse the list of fixed issues before jumping on this one, to see if it is something you really want to apply as a preview update. If none of them apply to you, or you can by for the time being, I'd suggest waiting to make sure it plays nice on other people's PCs.
Otherwise, you can grab it now by going to Windows Update on your PC and clicking on View optional updates. Expand the Other updates section and click the KB4577063 box, then hit Download and Install.