Dealing with a printer issue can cause you to pull your hair out (been there, done that), and unfortunately, recent updates to Windows 10 have put some users in that position. Following reports that Windows 10 version 1903 and later builds were prone to 'forgetting' USB printers, it seems this month's recent Patch Tuesday update has introduced more printer issues.
This latest bugs hitched a ride on KB4557957 for Windows 10 version 2004 (May 2020 Update) and KB4560960 for Windows 10 version 1909 (November 2019 Update), according to multiple complaints on Reddit and Microsoft's support forums, spotted by Windows Latest.

"Has anyone had issues today with printing and the latest Windows update? We're seeing problems with Ricoh printers that were previously stable. Changing the print driver seems to help but that's going to be a pain if I have to roll it out to too many clients," a user wrote on Reddit.
Others chimed in with similar complaints on a variety of printer brands, including Brother, Canon, HP, and Panasonic, in addition to Ricoh.
"This broke several Brother MFC-295CN printers. Printing sends to spooler and then it disappears from the queue quickly and does not print. A uninstall and reinstall of the printer and new drivers does NOT fix the issue. Uninstalling KB4560960 fixes it. Paused updates for 30 days," another user wrote.
One of Microsoft's independent advisors on its support forum said the company's engineers are aware of the issue and are "working on a patch to be deployed in the next update." It is not clear if that means the next Patch Tuesday, which would not roll out to PCs until July 13, or if an out-of-band patch would be issued. Out-of-band patches are typically reserved for major security flaws. 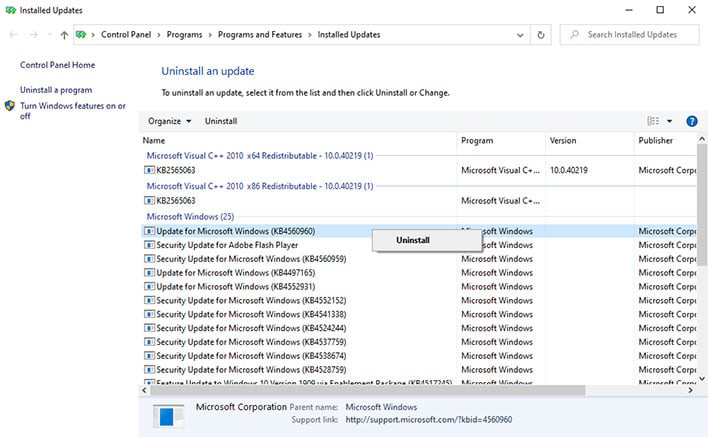 For users who are not able to wait one way or the other, a temporary fix is to roll back the cumulative update. You can do this by going to Windows Update, then scroll down and click on View update history. Click on uninstall updates, then look for and uninstall either KB4557957 or KB4560960, depending on which version of Windows 10 you are running.