In case you missed it, the May 2020 Update for Windows 10 is here, and you can force an upgrade if you are not among the first to receive it automatically through Windows Update. Before you do that, however, be aware that there are several known issues with this release. This is to be expected with this sort of thing, and is part of the reason why Microsoft does not dish out its feature updates to everyone at the same time.
The May 2020 Update brings Windows 10 to version 2004, up from version 1909 (November 2019 Update). Several rounds of testing within Microsoft's Windows Insider program took place before the final build starting rolling out to the public at large, with some known issues already in tow. Following its launch earlier this week, Microsoft added 10 open issues to its Windows release health dashboard.
They include...
You may notice the above list 'only' contains nine entries, not 10. That's because there are two separate ones affecting some PCs after updating devices with Conexant ISST audio drivers. One of them Microsoft chalks up to "incompatibility issues" between certain Conexant ISST audio drivers or Synaptics audio devices and Windows 10, and the other is a more general error.
In almost every case, Microsoft advises against applying the May 2020 Update, if any of the known issues might potentially affect your PC.
"We recommend that you do not attempt to manually update using the Update now button or the Media Creation Tool until this issue has been resolved," Microsoft says.
It's likely more issues will be discovered are more PCs apply the update. If you are eager to give it a whirl, head over to Settings > Windows Update and click on Check for updates. You may not see it yet, though. If it is available, you will have the option of installing it, otherwise might see a message saying to hang tight. 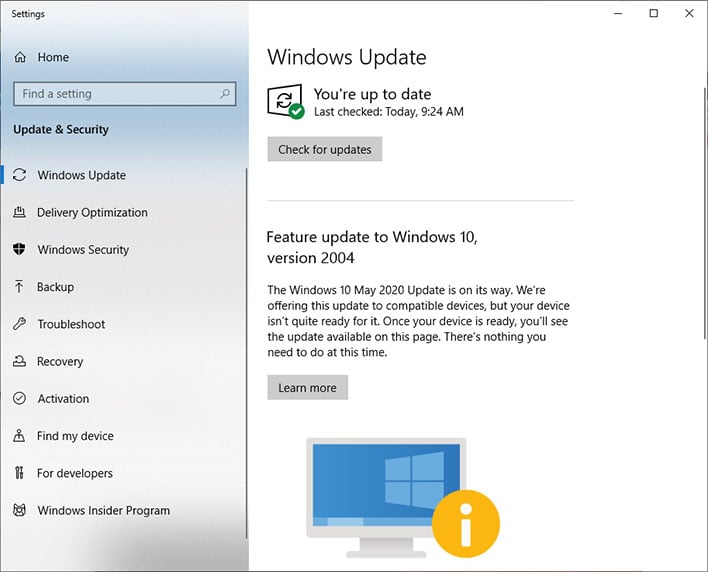 "The Windows 10 May 2020 Update is on its way. We're offering this update to compatible devices, but your device isn't quite ready for it. Once your device is ready, you'll see the update available on this page. There's nothing you need to do at this time," the message reads.
You can also try forcing the issue by heading to the Download Windows 10 website and clicking on Update now (it's the same portal where the Media Creation Tool is available).
If you are going that route, we recommend backing up your important data first. You may also want to update your drivers, particularly for your GPU.