It took a little longer than Microsoft expected for Windows 10 to reach 1 billion active devices, having hit that milestone in March 2020, a little over four and a half years after the operating system launched to the public. Now just over a year later, another 300 million monthly active Windows 10 devices have entered the fray.
That's according to Frank X. Shaw, communications lead for Microsoft, who announced the updated milestone on Twitter. It is not a shocking feat, given that the pandemic has spurred PC sales over the past year, as more people find themselves working from home and educating remotely, as part of a social distancing effort.

"Windows 10 now has more than 1.3 billion monthly active devices. And Microsoft 365 Consumer surpassed 50 million subscribers for the first time," Shaw said amid a barrage of Twitter posts. Shaw also noted that "people are turning to Xbox more than ever to play and chat with friends, and we saw record engagement, led by strength on and off-console."
The updated figure coincides with Microsoft sharing its earning results for the quarter ended March 31, 2021. Microsoft said it saw a 10 percent jump in Windows OEM revenue, en route to raking in $41.7 billion overall for the quarter, up 19 percent from a year ago.
"In our consumer business, Windows OEM and Microsoft 365 Consumer subscriptions benefited from a much stronger-than-expected PC market, despite significant ongoing constraints in the supply chain," added Amy Hood, CFO at Microsoft.

Windows 10 Is Getting A Fluent Design Overhaul And New Features 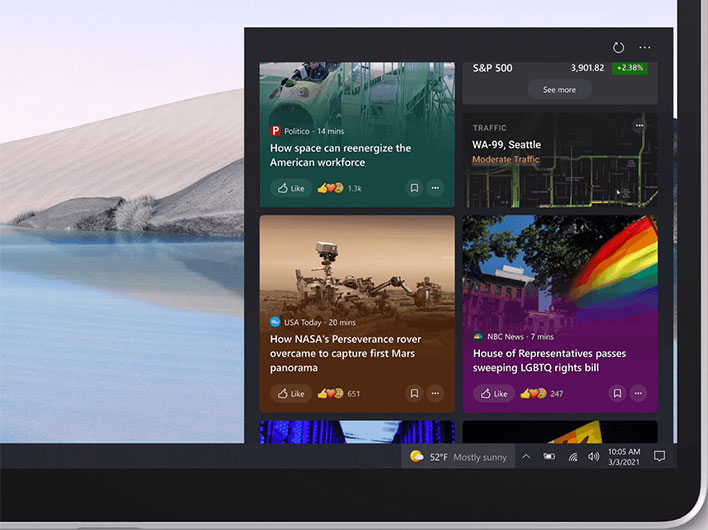 So, what comes next for Windows 10? The OS is a work in progress, with Microsoft continually tweaking it and adding new features. One of the biggest changes is a refreshed UI as part of Microsoft's Fluent Design language, to ensure Windows 10 maintains a modern look and feel. Part of that includes a fresh coat of paint to the news feed, as shown above.

"We’re excited to start rolling out a new design that makes it even more delightful to scan and interact with the headlines and stories in your feed. Imagery from articles now shines through with a vibrant and colorful design, making your feed more glanceable, engaging, and beautiful," Microsoft explains.
On the mobile side, Microsoft is currently testing a new EcoQoS feature aimed at lowering power consumption and ultimately improving battery life. According to Microsoft, this feature can reduce CPU power by as much as 90 percent for certain tasks.
Microsoft is also testing a new "Device Usage" page in the Settings app. This allows users to customize Windows 10 for "specific use cases," like gaming, which would alter Windows to show off games to users and help them discover new titles. 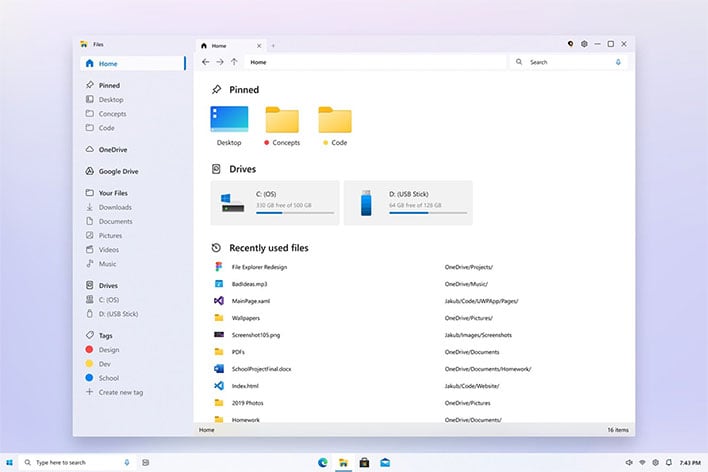 Interestingly enough, a 15-year-old from Poland recently garnered a ton of praise for a File Explorer concept, as shown above. It is in the vein of Microsoft's Fluent Design language, but is slicker than much of what we have seen so far.
"After more than a month, I finally finished by Fluent Design File Explorer concept! I hope you will like it!," the teen designer wrote.
He removed the ribbon interface and plopped everything in the left-hand windows pane/column, complete with folder trees for easier navigation. His concept also incorporates color coded folders, similar to Finder in macOS, and some new icons (not the ones Microsoft will use, as he began the concept before seeing those).
In any event, Windows 10 is a fluid OS, in that the look, feel, and experiences available to users will continue to change over time.