Microsoft may not be releasing numerical upgrades to its Windows operating system these days (which is to say we will never see a Windows 11), but it is constantly tweaking and, at times, even overhauling Windows 10 as time goes on. One of the biggest changes on the roadmap is the eventual wholesale alteration of the user interface, and another glimpse of what that entails is now available to certain Windows Insiders.
This is part of Microsoft continuing roll out of its Fluent Design language, to ensure the look and feel of Windows 10 stays fresh and modern. These things do not always work out as planned—remember the relatively short-lived Metro UI? Fortunately, Microsoft's efforts since then have been far less jarring.
As seen in the image above, Microsoft has applied a fresh coat of paint to the news feed in Windows 10. The aim extends beyond just visual appeal, though.

"We’re excited to start rolling out a new design that makes it even more delightful to scan and interact with the headlines and stories in your feed. Imagery from articles now shines through with a vibrant and colorful design, making your feed more glanceable, engaging, and beautiful," Microsoft explains. 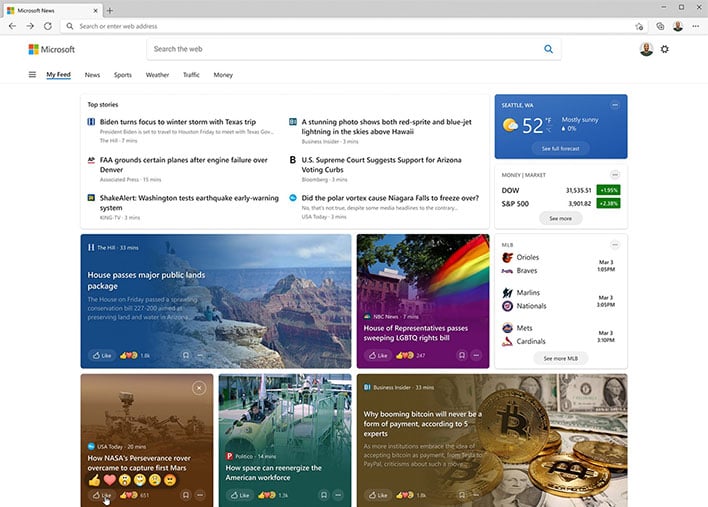 Users can also see additional updates when clicking "See more news," which opens up a new feed experience in the browser. The redesigned browser layout is intended to give the top headlines more visibility at a glance. Microsoft is also using larger, more vibrant cards to help show snippets of text, before jumping whole-hog into an article.
"Across news and interests and the homepage, we are also making it easier to share your reaction to the news, with updated emoji graphics so you can respond with a like, love, surprise, anger, and more," Microsoft says.
Beyond the overhaul to the news feed, Microsoft also updated several of the system icons in the latest test build for Windows 10. Have a look...

Microsoft made the change to align the icons with the intended Fluent Design style that is rolling out in bits and pieces (and has been for the past few years).

"This build includes a new font Segoe Fluent Icons. Areas of the OS that use the Segoe MDL2 assets such as the Start menu and Settings app will include the new icon designs which have a more rounded and simplified look and feel," Microsoft explains.
Beyond the new look and feel, the latest build (21327) offers up the usual round of general improvements and fixes. This particular build is available to Windows Insiders who are subscribed to the Dev channel, which doles out updated releases more frequently than the other channels.