The COVID-19 pandemic has had devastating affects across the globe, upending the everyday lives of nearly everyone, while at the same time resulting in the death of hundreds of thousands. Because of how COVID-19 is spread, people that can work from home along with students participating in virtual learning have resulted in a massive spike in PC sales.

According to Canalys, overall PC shipments for the year 2020 hit 297 million units, which was a 11 percent increase compared to 2019. In fact, 2020 represented the biggest leap in full-year PC sales growth since 2010, and marked the highest number of unit shipments since 2014. More specifically, looking at data just for Q4 2020, we see that PC shipments witnessed a staggering 25 percent uplift year-over-year.

Not surprisingly, Canalys indicates that consumer laptops and mobile workstations represented the overwhelming majority of new PC sales as people have tried to adjust to working remotely while COVID-19 has coursed its way through communities with reckless abandon. In fact, consumer laptops and mobile workstation notebooks accounted for 235.1 million (79 percent) of the total 297 million PC units sold during the year. Laptops have long outsold desktops in the PC market, but COVID-19 has only accelerated that divide. 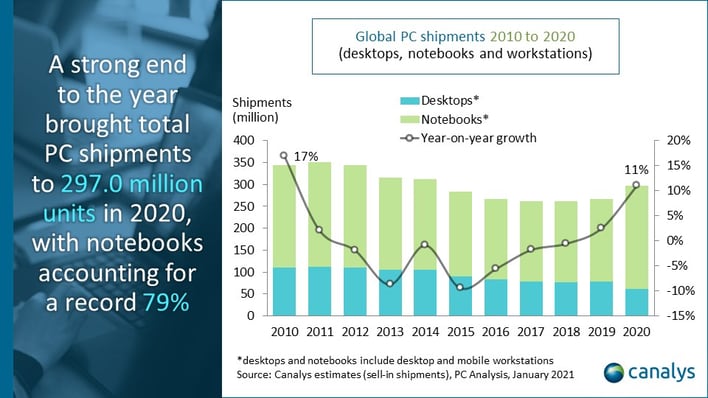 "The digital transformation the world has undertaken over the past year is unparalleled, and PCs were at the heart of this change," said Rushabh Doshi, Canalys Research Director. "As the world readies itself to get vaccinated and overcome the COVID-19 virus, it is important to remember that PCs have played a vital role at every stage of this fight, from understanding the virus and synthesizing the vaccine, to social monitoring and vaccine roll-out."

The top 5 players on the global stage should come as no surprise to anyone that has watched the industry in recent years. Lenovo, Hewlett-Packard, and Dell were the top three sales leaders, having shipped 72.6 million, 67.5, million and 50.2 million units respectively during 2020. Apple took fourth place with 22.5 million units shipped, while Acer rounded out the top 5 with 20 million units shipped. Of the top 5, Acer and Apple showed the strongest annual growth at 17.5 percent and 16.6 percent respectively.

It remains to be seen if 2021 will continue to see such huge gains in PC shipments, given that many people after the spike in 2020. Many peoples' (and corporations') hands were forced when it came to obtaining new PC during 2020, meaning that the big surge could be over with. However, CES 2021 has seen the launch of new mobile processing platforms from both AMD and Intel which could drive sales through 2021. And we can't discount Apple, which is doing its own thing with its homegrown M1 SoC and is looking to further drive sales as its Arm processor transition expands to more members of its Mac family.