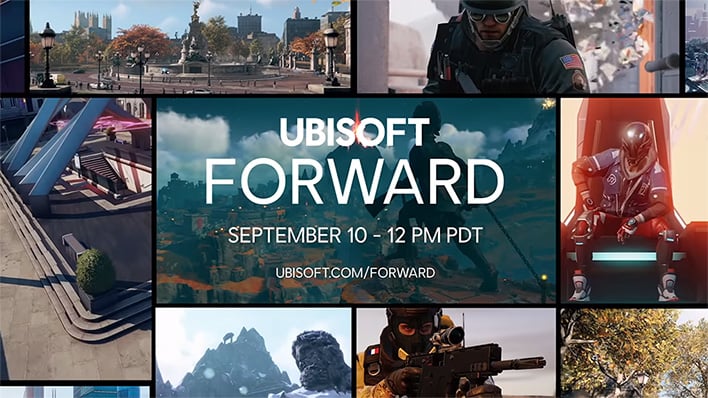 It is almost time for another Ubisoft Forward event, which is a livestream that will entail "the latest updates about your favorite Ubisoft games and news on what's to come." With regard to the latter, will we see a Prince of Persia: The Sands of Time remake announcement? Possibly, but you will have to tune in to find out.
There are multiple destinations where you can catch the livestream, including right here at HotHardware, embedded below (via YouTube)...
Or you can head directly to the YouTube feed, if you would prefer to leave us (we'll be sad, but promise not to stalk you). Alternatively, you can tune into Ubisoft's Twitch channel and catch the event there as well—dealer's choice. Regardless of where you choose to watch the Ubisoft Forward event (assuming you are planning to watch), it will kick off at 12:00 pm PT (3:00 pm ET) today.
There will also be a pre-show event an hour earlier, starting at 11:00 am PT (2:00 pm ET). Ubisoft says it will contain "news and content from games like Brawlhalla, Tom Clancy's Ghost Recon Breakpoint, and more."

During the last Ubisoft Forward event a couple of months ago, the publisher highlighted the free-to-player shooter Hyper Scape, along with Far Cry 6 starring Giancarlo Esposito (from Breaking Bad and Better Call Saul fame), Assassin's Creed Valhalla, and Watch Dogs: Legion. We are hoping for some heavy hitting announcements this time as well.
A remastered version of Prince of Persia: The Sands of Time seems likely, given recent leaks. It would certainly fit in with Ubisoft's promise to deliver a "few surprises" during the event. Beyond that, Ubisoft confirmed it will provide information on what is headed to Watch Dogs: Legion, Hyper Scape, and Rainbow Six Siege, as well as some "big surprises."
You can also expect some in-game rewards to be handed out, which will require logging into your Ubisoft account.