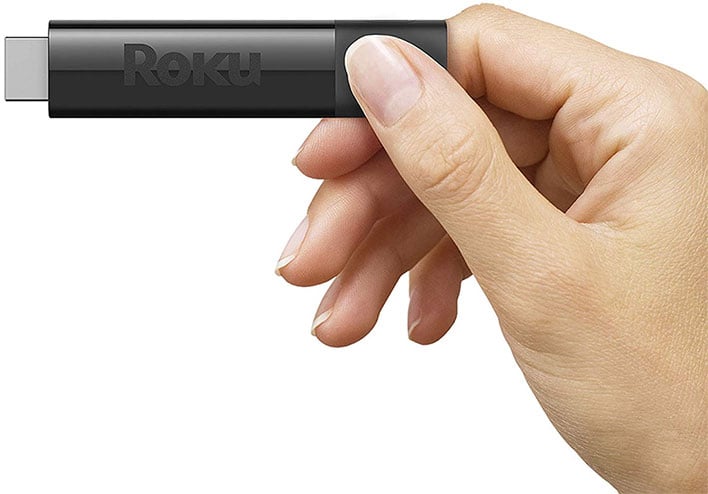 Earlier this month, Netflix flipped the switch and disabled support for its streaming service on some older hardware, including select 2010 and 2011 model Samsung TVs, Vizio TVs sold around 2012 to 2014, and a handful of Roku devices up to around 8-10 years old. Rather than buying a new TV, though, the path of least resistance (to your wallet or purse) is to upgrade your Roku stick or set-top box. To help with that, we have tracked down some deals.
The reason Netflix gave certain devices and streaming platforms the boot is because they use Windows Media DRM, whereas the streaming service made the switch to Microsoft's PlayReady DRM in 2010. Now nearly a decade later, Netflix decided it was finally time to stop supporting devices that could not be upgraded to PlayReady.
For Roku users, that means the following devices no longer work with Netflix: Roku SD (N1050), Roku HD-XR (N1101), Roku HD (N1100, 2000C), and Roku HD (2050X, 2050N, 2100X, 2100N). Here are some upgrade options...

Save 24 Percent On The Roku Streaming Stick+

Whether you own one of those models or are otherwise interested in a modern streaming solution, there are a few discounted Roku models you might find interesting. The first is the Roku Streaming Stick+, as shown above. The Roku Streaming Stick+ is on sale at Amazon for $45.33 (down from $59.99). It plugs into a free HDMI port on your TV (or surround sound receiver, if you're passing through that) so you can stream content from Disney+, Apple TV, Netflix, Hulu, and a plethora of other services.

The Roku Streaming Stick+ is a high-end solution with all the bells and whistles of a dongle—it supports up to 4K resolution content, it can display HDR feeds, and it comes with a voice-controlled remote with dedicated buttons for Netflix, ESPN+, Hulu, and Sling.

If you're looking for something a little cheaper, the Roku Express HD is on sale at Amazon for $24 (save $5.99). Sure, it's not a ginormous savings, but it's already a rather inexpensive streaming solution, so a 20 percent discount is pretty good.
The Roku Express HD is a little bigger than a dongle, though still small enough to fit in your hand (it's about the size of a modern Chromecast). Roku recommends this one for first-time streamers, secondary TVs, and as an inexpensive gift. The pitch is that you're not overpaying for features. As such, it doesn't support 4K or HDR, but it can beam content up to 1080p (with up-scaling from 720p). It also offers digital stereo over HDMI, DTS Digital Surround pass-through over HDMI, and Dolby Audio and Dolby Atmos pass-through over HDMI. And like the aforementioned dongle, it comes with the same voice-controlled remote.

Save 31 Percent On The Roku Ultra 4K HDR Streaming Player

The biggest savings come from Roku's top-shelf product, the Roku Ultra. It lists for $99.99, but you can buy the Roku Ultra for $68.87 at Amazon right now, saving you $31 and change.
Technically a set-top box, the Roku Ultra is not very big, but it is fully featured with fast performance. You get 4K Ultra HD support, HDR support, a voice-controlled remote, DTS Digital Surround, Dolby Audio, Dolby Atmos, and a set of JBL headphones so you can stay up late and crank up the volume without waking the kids or your significant other.