TSMC Is Building A Second Arizona Fab To Supply 3nm Chips To AMD, Apple And NVIDIA

Taiwan Semiconductor Manufacturing Company (TSMC) is ramping up its efforts to increase chip production on US soil, and it has plenty of support from both the White House and major wafer customers, including AMD, Apple, and NVIDIA. As part of those efforts, TSMC is more than tripling its initial investment of $12 billion to $40 billion at its Arizona site, where the chip maker announced it has started construction on a second fab that will begin mass producing 3-nanometer silicon in 2026.
The announcement comes on the heels of a recovery from a chip shortage facilitated in large part by a global pandemic. Even now, the shortage still ripples throughout the industry as demand remains high for cutting-edge products, including game consoles like the PlayStation 5 and Xbox Series X, and the latest-generation graphics cards (try finding a GeForce RTX 4090 in stock at MSRP).

This helped spur TSMC and Intel to each commit to investing billions of dollars into new and upgraded fab sites. As it pertains to TSMC, the company last year announced plans to spend $100 billion over three years to fuel research and development, as well as bolster manufacturing.
As part of that plan, TSMC says its fabs in Arizona represent one of the largest-ever foreign direct investments in US history. The two fabs will create 10,000 high-tech jobs, on top of the 10,000 construction workers who helped construct the site. Once finished, the fabs will collectively manufacture over 600,000 wafers each year.
"I’m deeply honored that we have been able to gather here to celebrate such a historic milestone for TSMC, which represents our dedication to building a semiconductor ecosystem here in the USA in order to better serve our customers," said TSMC CEO Dr. CC Wei during a ceremony announcing the second site. "This project is truly a testament to the Grand Alliance TSMC has formed with customers, suppliers and partners to further our collaboration and unleash innovation." 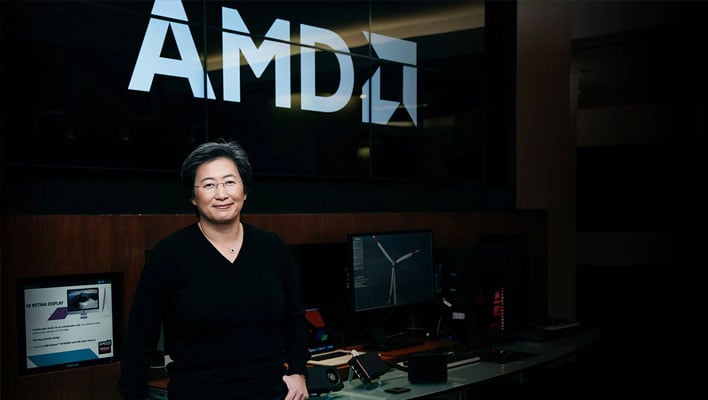 AMD confirmed it will be a "big customer of both fabs." The company also said it would not be possible to do what it does in the industry if not for its partnership with TSMC.

"At AMD, we are all about pushing the envelope in high performance and adaptive computing to solve the world's most important challenges," said AMD CEO Dr. Lisa Su. "As the leader in semiconductor manufacturing, TSMC enables us to focus on what we do best: designing innovative chips that change the world."
"A strong, geographically diverse, and resilient supply chain is essential to the global semiconductor industry. TSMC's investment and expansion in Arizona is extremely important and mission critical for both the semiconductor industry and our extended ecosystem of partners and customers. AMD expects to be a significant user of the TSMC Arizona fabs and we look forward to building our highest performance chips in the United States," Dr. Su added.
AMD has grown into a chip juggernaut that serves practically all markets, including processors and graphics chips for game consoles, advanced CPUs for the data center and home consumers, specialized accelerators, and embedded products.

Apple CEO Tim Cook also praised TSMC's investment into US manufacturing, saying the Arizona site "marks a new era of advanced manufacturing in the US." Cook also said Apple will be TSMC's largest customer at the Arizona site.
"Apple silicon unlocks a new level of performance for our users. And soon, many of these chips can be stamped 'Made in America'," Cook stated. 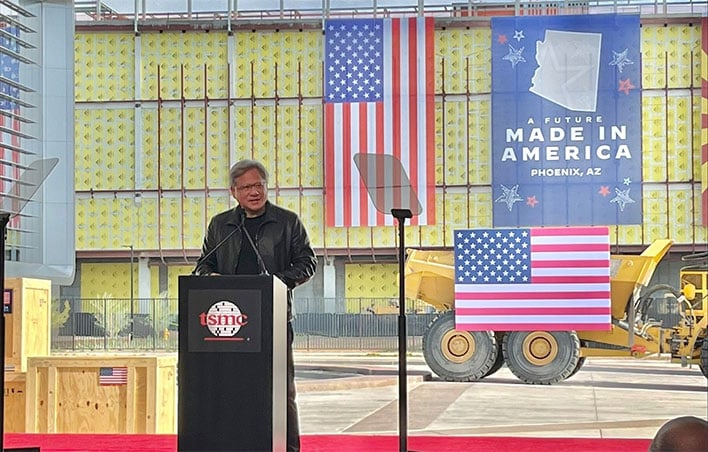 Like AMD and Apple, NVIDIA is a fab-less company, meaning it designs silicon and outsources production to outfits like TSMC. And likewise, NVIDIA was in attendance at the ceremony, where it called the announcement a "game-changing development."

"Our founder and CEO Jensen Huang joined President Joe Biden and TSMC founder Morris Chang at TSMC's historic event #TSMCArizona. In his speech, Jensen hailed TSMC’s $40B investment in U.S. chip manufacturing as a masterstroke and a game-changing development for the industry," NVIDIA stated on Twitter.

Happening Now: President Biden discusses how his economic plan is leading to a manufacturing boom, rebuilding supply chains, and creating good-paying jobs in Arizona and across the country. https://t.co/K4TU3iBk06

Meanwhile, President Biden is hailing this as a win for his administration, saying during a speech that "American manufacturing is back, folks." Last August, Biden signed the $52.7 billion CHIPS and Science Act into law, which provides billions of dollars in grants, tax credits, and various other incentives to encourage companies like TSMC to increase investments in the US.
It will take some time for all these investments and commitments to bear fruit. Looking ahead, however, the hope is that TSMC's Arizona fabs and other measures will not only strengthen manufacturing in the US and boost the economy, but also prevent another jarring shortage.