Today marks the final day of Epic's holiday free games offer, and it is ending the promotion with a mighty big bang. As in, you can claim not just a single title today, but all three Tomb Raider games that are part of the reboot trilogy. There's even some DLC sprinkled in. If you missed out on the trilogy (or just want to own the games on another launcher), now is the time to pounce.
Just like last year, Epic has been giving away free game each day for the second half of December. Here's what they have consisted of, leading up today's three-game refresh...
There are some standouts among the bunch, including Shenmue III, Vampyr, and Prey. But for some, Epic saved the best for last. 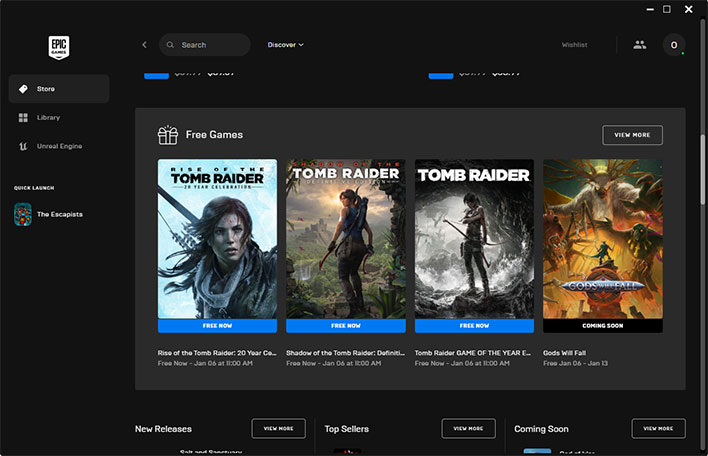 Developer Crystal Dynamics and publisher Square Enix rebooted the franchise in 2013 with the release of Tomb Raider, rather than release a sequel to the 2008 Tomb Raider: Underworld game. It's up for grabs today and is the Game of the Year edition, which includes some DLC that doesn't come with the standard release.
The reboot continued with Rise of the Tomb Raider in 2015, which takes Lara Croft into Siberia. Epic is giving away the 20 Year Celebration edition, which comes with the base game and Season Pass with new content.
Finally, Epic is gifting Shadow of the Tomb Raider: Definitive Edition, the last game in the trilogy. Once again, this contains extras over and above the base game, including all seven DLC challenge tombs, as well as all downloadable weapons, outfits, and skills.
Unlike in prior days, you have more than 24 hours to claim these titles. Epic is going back to weekly free game refreshes, and all three titles are up for grabs through January 6, 2022 at 11am ET. At that time, Gods Will Fall will take their place.