AMD's AM5 socket and Ryzen 7000 processors retain compatibility with CPU coolers designed for Socket AM4. This presents a problem, because the LGA-style socket is much slimmer than the PGA style used on Socket AM4, so using the same coolers meant building Socket AM5 CPUs with extremely thick heatspreaders. Despite some insisting that it "shouldn't" matter for cooling performance, it absolutely does. We saw that with Der8auer's delid before, and now JayzTwoCents has proven it again by lapping almost a millimeter of material off of his CPU.


In a 21 minute video filled with trial-and-error testing, Jay uses a belt sander along with a custom frame created by the aforementioned Der8auer to remove a significant amount of material from the top of his Ryzen 9 7950X CPU. Before doing so, he tests the processor in Cinebench and observes that it is running just shy of its thermal limits with a large closed-loop cooler mounted to it.
After removing some of the heatspreader material, he has some trouble getting a cooler to mount up properly with the CPU. Removing that material on the CPU means that standard CPU cooler mounts won't line up correctly, and it takes several iterations on a custom mount before he gets good contact, whereupon he finds a small but statistically significant reduction in CPU temperatures. Dissatisfied with the result, he switches from the Arctic MX-4 thermal compound he was using to the Thermal Grizzly Kryonaut Extreme that Der8auer sent him and sees another small drop in temperatures.


Altogether, the mod netted him around 10°C in thermal headroom, which he used to push the CPU to some 5.4 GHz all-core clock. He didn't give any performance numbers with the overclock, but it's not too far off the stock single-core boost speed of 5.7 GHz, and should give a nice boost to multi-threaded workloads like Cinebench. 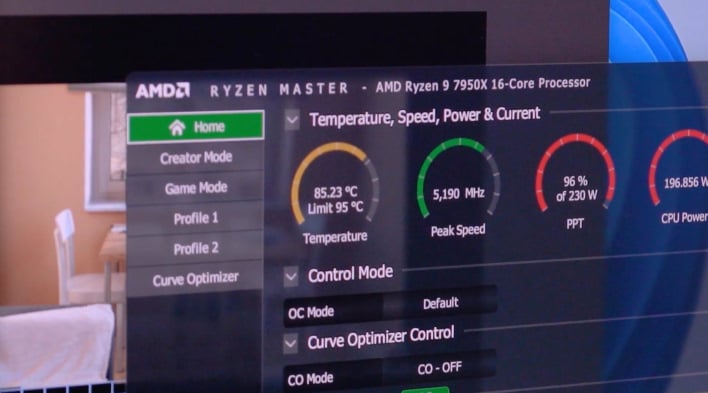 For his own part, Der8auer says that lapping the chip generally gives around a 6°C improvement in temperatures. That's pretty far from the massive gains that he saw upon delidding the processor, but this is all a bit of an inexact science anyway; we didn't see if Jay was controlling his environment for ambient temperature, and that could have affected his results.


Besides the obvious danger of using a power tool with the ability to remove skin, flesh, and bone at a terrifying pace, this type of mod will also void the warranty on your brand new Zen 4 CPU. Jay doesn't recommend performing this operation, and neither do we. Don't try this at home, kids. If you're serious about modifying your CPU for improved cooling, just wait for Thermal Grizzly's forthcoming delid tool.
It will be interesting to see if AMD's next Socket AM5 processors retain the thick heatspreader of the Ryzen 7000 family. It's easy to imagine a situation where coolers come with separate AM4 and AM5 mounting hardware, with the AM5 kit placing the cooler lower to deal with hypothetical future CPUs with thinner heatspreaders.

That sounds confusing, but AMD's in a bit of a tough spot with this processor design. While the company says running at 95°C for extended periods won't hurt the processor, it does slightly affect performance, as Jay demonstrates in his video. Hopefully the company reasons out a solution to this issue before its next CPU generation.