T-Mobile, America’s third-largest wireless carrier, is flexing its muscles when it comes to 5G connectivity. Last month, the company announced its latest Un-carrier initiative which gets customers 4 lines of unlimited 5G data for a reasonable $100 per month.

Today, T-Mobile is doubling down with the announcement that it has launched the world’s first nationwide standalone 5G network. Now, we all know that there are numerous 5G networks that are already up and running around the globe, including from T-Mobile’s domestic rivals AT&T and Verizon.  So, what’s up with T-Mobile’s latest 5G claim? 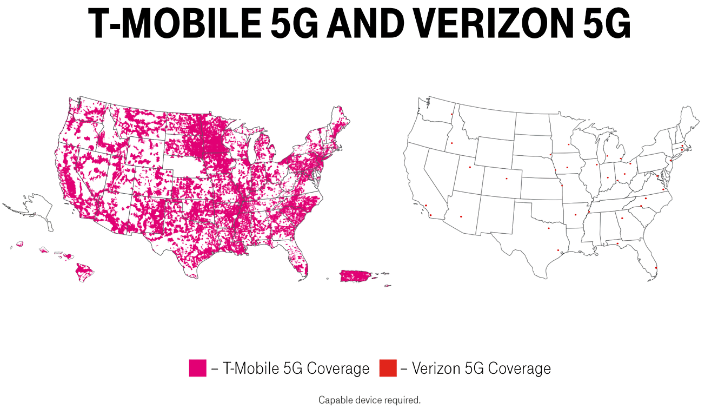 Well, with the rest of the nationwide 5G networks, wireless carriers are actually sharing bandwidth with existing 4G LTE towers. In other word, it’s a hybrid solution that doesn’t provide customers with the optimum performance boost and latency reductions afforded by the 5G wireless standard.

That’s why T-Mobile is touting its standalone nationwide 5G network, which is free of any legacy 4G LTE limitations. “In the near-term, SA allows T-Mobile to unleash its entire 600 MHz footprint for 5G,” writes T-Mobile. “With today’s launch, 600 MHz 5G can go beyond the mid-band signal, covering hundreds of square miles from a single tower and going deeper into buildings than before.

“In SA areas, T-Mobile engineers have already seen up to a 40% improvement in latency during testing, and that is just the beginning of what can be done with Standalone 5G.”

Due to this move, T-Mobile says that its 5G footprint has expanded by 30 percent and that it now covers 7,500 cities across the United States reaching 250 million people. At this rate, T-Mobile says that it’s 5G network is twice as large as AT&T’s nationwide network, and 10,000 times bigger than what Verizon has accomplished with its mmWave 5G rollout.

5G connectivity is pretty much a prerequisite for any flagship smartphone launching in 2020, and it’s starting to move further down-market to more affordable devices like the OnePlus Nord and the upcoming $499 Google Pixel 4a (5G).