AT&T has announced the next big step for its growing 5G network: nationwide availability. By the company’s own estimates, its 5G network is currently spread across nearly 400 U.S. markets and blankets just over 250 million Americans.

As far as we can tell, AT&T thankfully isn’t including its controversial and misleading 5GE wireless coverage (which is basically just a fancy name for 4G LTE-Advanced) in its 5G declaration. Instead, AT&T says that its ultra-fast mmWave 5G technology is available in 35 markets. Its sub-6GHz “low-band” 5G spectrum is used to cover the rest of the nation (crucially, outside of large city centers).

“With AT&T 5G reaching nationwide, our network is beginning the journey to transform connectivity as we know it by setting a new bar of breathtaking experiences and improved efficiency,” said AT&T Communications CEO Jeff McElfresh. “Businesses, developers and consumers are already tapping into 5G’s potential and we’re thrilled for customers across the U.S. to experience it for themselves. It’s an exciting time in technology.” 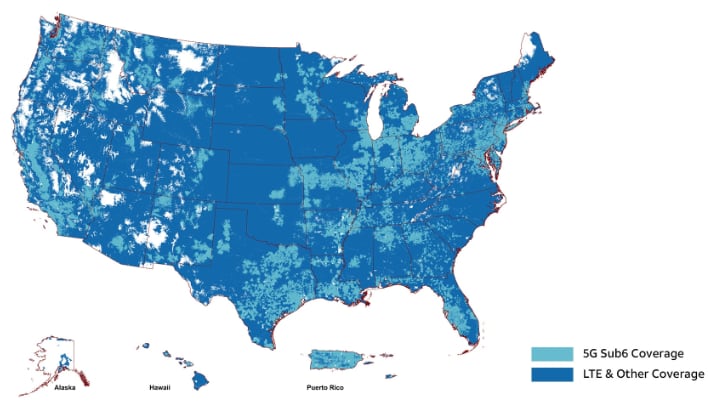 Looking at AT&T’s 5G coverage map, however, we’re not so sure how the company can claim full nationwide coverage with so many bare spots, but it is worth pointing out. And as for the company’s mmWave coverage (which it labels 5G+), it is currently limited to the following cities:

To see AT&T full 5G coverage maps, you can visit the following link. And to see a full list of all of the cities that currently have 5G access (which is growing every week), you can check out this link.