Microsoft has been reportedly working on some new Surface hardware that will be arriving soon, including a new Surface Dock 2, Surface Book 3, and Surface Go 2. A couple of interesting reports have come to light with one indicating a listing believed to be for the Surface Go 2 that has turned up at the FCC.

While there's no official mention of the Surface Go 2 in the FCC filings, it does mention a "portable computing device" and shows model number 1927. The FCC listings also show a codename of "EV2," which was a name previously used by the Surface Go and Surface Go 2 devices on Geekbench, where alleged benchmarks have turned up. The FCC information shows that the machine is running Windows 10 Pro, and reports indicate that the wattage of the device suggests the listing isn't for a Surface Pro or Surface Book successor. 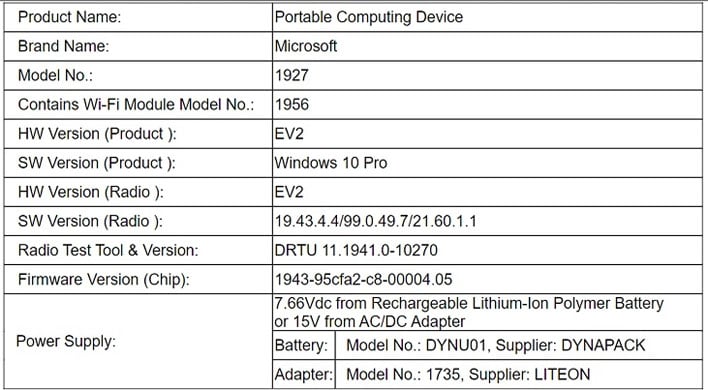 Other tidbits gleaned from the FCC filing include NFC, LTE, Wi-Fi, and a rechargeable lithium-ion polymer battery. Previously leaked benchmarks indicate that the Surface Go 2 may use an Intel Core m3-8100Y dual-core processor. Leaks have indicated that there will be more than one Go 2 device with one featuring 8GB of RAM with 256GB of SSD storage and one featuring a Pentium 4425Y CPU, 8GB of RAM, and 128GB of storage.

Along with the FCC listing for the new Surface Go 2, retailer listings for it along with the Surface Dock 2 and Surface Book 3 have surfaced in Europe. The Surface Dock 2 is listed at a German retailer called Shopmat.be, and no details or images are offered. Speculation suggests that the refresh could add USB-C. Retailer listing have also appears for "Project T" and "Project U," thought to be 13.5-inch and 15-inch Surface Book 3 devices. The German retailer showed five Project T listings starting at €1,617 and reaching to €2,616 on the high-end.

The Project U machine showed multiple listings ranging from €2,234 to €3,441. Listings also showed a Surface "Project V" device that showed five configurations ranging in price from €407 to €847 that is thought to be the Surface Go 2. The listings have since been pulled from the website at this time. The Surface Book 3 and Surface Go 2 were previously rumored to debut at a spring hardware event, which could still happen -- at least virtually.