The hits just keep coming for those that have bought a new iPhone 12 and are looking to tap into Apple's growing MagSafe accessory ecosystem. The company has just now confirmed that its 29W chargers, which were still on sale as recently as two years ago, are insufficient for charging two devices with the new MagSafe Duo wireless charger (which can charge an iPhone 12 and Apple Watch simultaneously).

Before we even get into the latest charging fiasco with the MagSafe Duo, we must first tackle the absurdity of the notion that this wireless charger doesn't even come with a wall power adapter. A wall adapter is necessary for the product to work, and at $129, you would think that Apple would include one, but we digress... 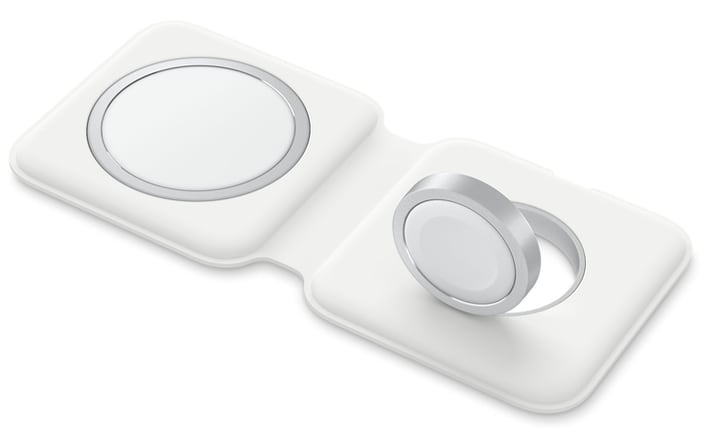 The main problem here is that the older 29W USB-C power adapter does not support 5V/3A or 9V/1.67A power ratings necessitated by the MagSafe Duo accessory, which means that it cannot charge an iPhone and an Apple Watch simultaneously. Despite the fact that many customers would rightfully assume that their 29W USB-C power adapter would be sufficient, it will charge one or the other, but not both, with the MagSafe Duo.

Instead, Apple is suggesting that customer pick up the 30W USB-C power adapter, which replaced the 29W version, since it is insufficient for the MagSafe Duo. The only problem is that the 30W USB-C power adapter costs $49. So, if you don't already have a 30W power adapter laying around the house (which isn't being used for another Apple devices), your total outlay to make a MagSafe Duo function properly is going to be a whopping $178. All of that for a flimsy accessory that will show visual deformities if you use it as intended. The Apple support document for the MagSafe Duo notes:

As with most soft materials, the covering of accessories might experience normal wear over time. The hinge area of your MagSafe Duo Charger might wrinkle over time if kept in the folded position. Leaving your MagSafe Duo Charger in a very hot environment (like the inside of a car on a hot day) in the folded position might lead to more visible, deeper wrinkles in that area. This doesn't affect the functional performance of the accessory.

This is not the first dustup that we've reported with new MagSafe accessories for the iPhone 12. The standard MagSafe charger is also finicky with Apple's own chargers, and it was found that the company's 18W USB-C and 96W USB-C power adapters were unable to deliver the full 15W to an iPhone 12. Apple crowed that not including a charging brick it the box was an "environmental initiative" mean to save the planet because most people already had a charger on hand. However, what the company failed to point out is that most iPhone users either 1) had a USB-A power adapter, which wouldn't work with the included USB-C to Lightning cable, or 2) if they had an Apple USB-C adapter on hand, it wouldn't charge the iPhone 12 at full power.

Needless to say, this whole MagSafe "wireless" charging ecosystem is rife with complexities, incompatibilities, and downright confusion for customers. At this point, it seems as though simply plugging in a Lightning cable is the "smart" option.