After announcing last month that Marvel's Spider-Man would shed its PlayStation exclusivity and join the PC realm in August, Sony has now offered up some additional details, including what special features are included and what kind of hardware you'll need to run the game in all its ray-traced glory. Sony also shared a dazzling trailer with a mix of cinematic and gameplay visuals captured on PC.
Starting with the feature upgrades, Sony says the goal with Marvel's Spider-Man Remastered was to make the game "a visual stunner on the PC platform and that meant opening up extensive configurability" options. For those with the requisite hardware, ray-traced reflections are part of the package. Sony also confirmed that the remastered release supports NVIDIA's Deep Learning Super Sampling (DLSS) and Deep Learning Anti-Aliasing (DLAA) technologies.
"Many other rendering systems are more customizable than they have been in the past, with additional quality levels and algorithmic options. These include SSAO, texture filtering, LoD quality, shadows, and more. We support windowed, full screen, and exclusive full screen rendering modes," Sony says.

The game will also play nice on ultra-side screen displays. It supports a whole bunch of resolutions and aspect ratios, including 16:9, 16:10, 21:9, 32:9, and 48:9. Suffice to say, this doesn't appear to be a lazy port. To that end, PC players will be able use the trusty old keyboard and mouse combo, or Sony's PlayStation DualSense wireless controller with adaptive trigger feedback and haptic responses in tow.
"With Steam Input support, there are innumerable remapping options available, and the game will also offer multiple accessibility features. Marvel’s Spider-Man Remastered will also support achievements and cloud saves on both Steam and the Epic Games Store," Sony explains.

Here's a look at how it all comes together in a teaser trailer...

You'll need some meaty hardware to crank up the settings and enable those ray-traced visuals. For those just looking to play the game without dialing up the eye candy, though, the starting point (720p at 30 fps) isn't too demanding.
Here's a look... 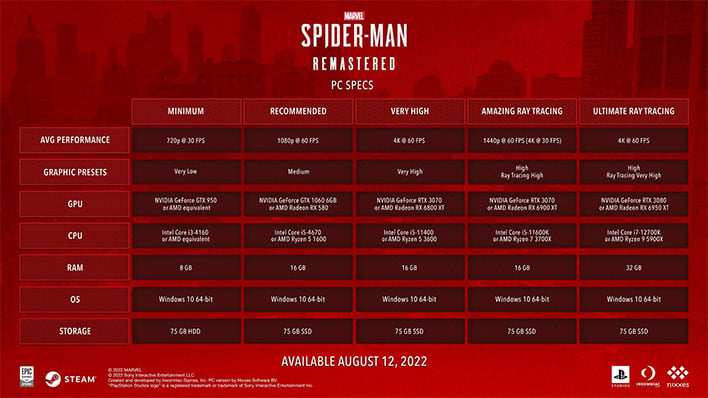 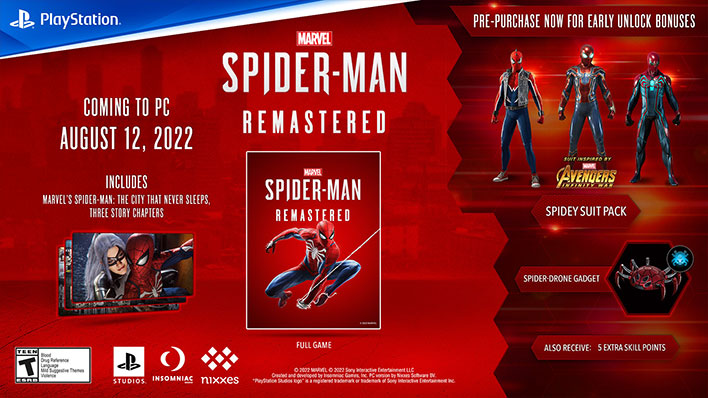 The releases on August 12 and is available to pre-purchase on Steam and the Epic Games Store for $59.99. Those who who preorder will receive a handful of bonuses, including early unlocks for the Iron Spider-Suit, Spider-Punk Suit, Velocity Suit, and Spider-Drone combat gadget, along with 5 extra skill points to spend on upgrades.