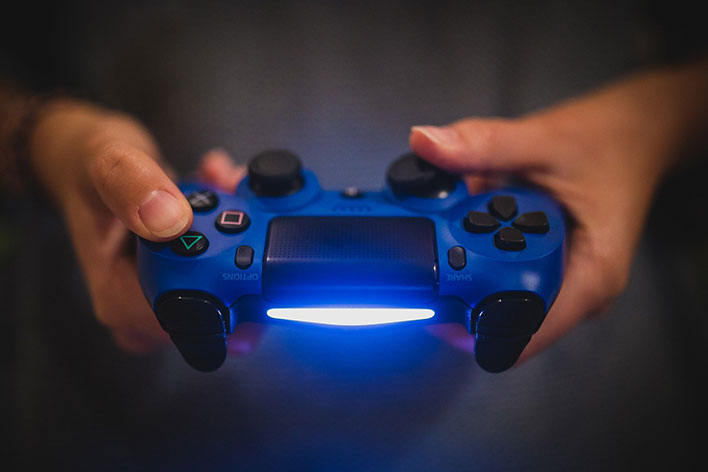 More details of the adaptive triggers on the DualShock 5 controller for the PlayStation 5 is coming to light. Such a feature was referenced in a patent filing last November, and now a new patent filing highlights the feature once again, along with some other elements that have yet to be revealed in full.
The new patent shows up on the World Intellectual Property Organization (WIPO) website, as spotted by a member of the Resetera forum ("gofreak"). All of the text is in Japanese, and so we are relying on a Google translation, and that of gofreak. Nevertheless, it shows that several people are attached to the patent, including Nicolas Doucet, creative director at Asobi, producer of Astro Bot.
Part of the patent outlines a climbing mechanic, with the left and right triggers on the DualShock 5 corresponding to the character's hands. The controller is tilted toward grips, allowing the player to press the trigger button to climb. In this example, a light pull would result in the character not be able to hold on, and falling. Likewise, putting too much pressure on either of the triggers could damage the character's grip.
This could be used for scaling a cliff or climbing ladder, to give a couple of examples. In order to know how much force a player should be exerting on either trigger, there would be visual and audio cues, along with vibration from the DualShock 5 controller.
The other interesting section of the patent covers an object cutting mechanic. Here's ho gofreak parsed the text...

The gamepad is tilted to control the angle of, for example, an electric circular saw relative to a target object. When not in contact with an object, the vibration and audio from the controller speaker can impart an idle state in the saw. You control the saw motor with a trigger. When you tilt the saw into contact with the object, the vibration can indicate the contact and the start of the cut. You pull the trigger to activate the saw and start cutting into the object. A force is applied back against the motion of the trigger that depends on the material of the object—wood might impart small resistive force, stone might impart strong resistive force. As you cut through the object, the vibration in the grips also changes vs the saw idle state. When you finally cut clear through the object, the trigger resistance gives way to nothing, and the controller sound and vibration return to the saw idle state. The idea being to basically give you a different sense of resistance while cutting through different objects, and the sense of breaking through when you finish the cut.

These are both interesting scenarios. They might also be just a glimpse of what the DualShock 5 will introduce to the controller equation. Back in October, Sony Interactive Entertainment president and CEO Jim Ryan said one of the goals with the PS5 and DualShock 5 is to "deepen the feeling of immersion when you play games."
"We had the opportunity with our new controller to reimagine how the sense of touch can add to that immersion," Ryan stated in a blog post.
He went on to talk about adopting haptic feedback to replace the rumble technology fond in current and previous generation controllers. Ryan also confirmed that adaptive triggers would play a role, saying developers would be able to program the resistance to offer players a tactile sensation of the game world (like drawing a bow or accelerating an off-road vehicle through rough terrain).
The PS5 will arrive in holiday 2020.