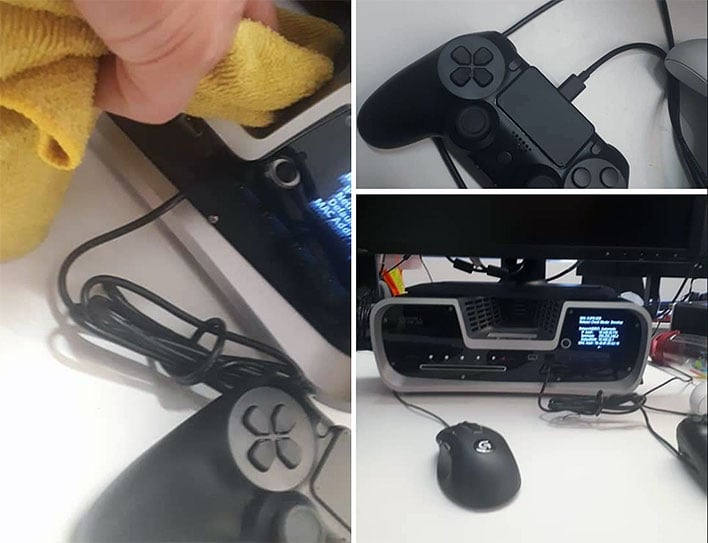 Only Sony really knows what the final version of the PlayStation 5 will look like when it ships to consumers at the end of the year. As we wait for the big date, however, more pictures have emerged showcasing the PS5 devkit that developers have access to in order to make and test PS5 games on. We also get a glimpse of the DualShock 5 controller.
The PS5 devkit has been the subject of numerous leaks and rumors, including prior sketches (from a patent application) and subsequent renders that found their way to the web. It is a unique design for sure, with a V-shaped cutout in the heart of the console. It looks sort of like an alien spaceship, and is the kind of design that people are likely to either emphatically love or vehemently hate.

Whether the PS5 devkit resembles anything close to the final product (probably not) is not known outside of Sony. Either way, the new photos give us a nifty glimpse of the PS5 devkit, with a clear view of the front. We can see an LCD screen embedded on the right side of the front panel with certain vitals displayed, such as the MAC address.
We also get a better look at the Blu-ray drive, or at least the slot for the internal Blu-ray drive, and several USB ports sitting to the right of it. One of the ports is occupied by a game controller, presumably the DualShock 5.
The controller is obviously a prototype design (assuming these images are real in the first place), as there are no button labels. While things could certainly (and probably will) change between now and the PS5's release, the DualShock 5 appears largely unchanged from the DualShock 4, at least in the shape and layout of the buttons.
Sony plans on launching the PS5 during "holiday" 2020, which likely means November or December of this year. It will feature custom AMD silicon with Zen 2 CPU cores paired with a Navi GPU boasting hardware-level support for real-time ray tracing. Sony has also made a big deal about the storage setup consisting of a solid state drive (SSD).