Look, Intel's Arc A770 and Arc A750 graphics cards are fine slices of gaming silicon that serve a desperate need for lower priced GPUs. We've put both models through their paces and came away generally pleased with the bang-for-buck proposition of both cards. But the scalper pricing we're now seeing on eBay? The facial expression of our own Marco Chiappetta in the above image says it all.
It's as if he's saying, "I can't even!" after looking at listings on eBay with hyper-inflated price tags. In reality, the image is just a poorly timed screenshot from our Arc unboxing video. Except the timing actually works out to be excellent, given the topic at hand—Arc A770 and Arc A750 cards showing up in eBay auctions for way above MSRP. 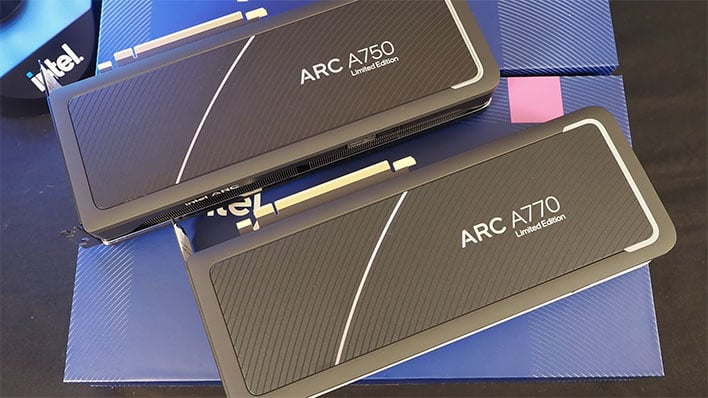 So here's the deal—Intel has priced its Arc A770 LE at $349 and Arc A750 LE at $289, both of which are fair for the performance they deliver. Sure, they tend to struggle in DirectX 11 games, but with DirectX 12 titles and with ray racing enabled, they compare favorably with the competition. We also like the fit and finish of Intel's Limited Edition cooler design.
As is usually the case, though, scalper pricing throws all that out the window. The same is true of the overpriced GeForce RTX 4090 listings we wrote about last week, and it applies to Intel's discrete Arc GPUs as well. 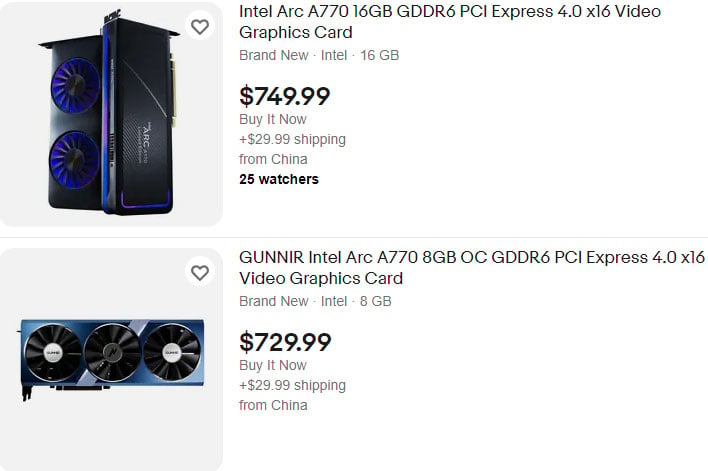 Scalpers don't just want you to pay way above MSRP for GPUs, they want you to foot the shipping bill too!

Looking at the current crop of Arc A770 listings on eBay, the asking price is around $760 to $780 (with shipping charges applied). There aren't a whole lot of them, at least. As for the Arc A750, scalpers have the card listed at anywhere from around $415 to $710. Most are in the $430 range, but even at the lower end, the value proposition goes up in smoke.
Same goes for marketplace listings. For example, a third-party seller on Newegg has Acer's Predator BiFrost Arc A770 OC card listed for $720. That's a hard pass from us, and it should be with your as well. Instead, if you're looking to spend in these price ranges, there are better options out there. Here are several examples...
Once you start venturing into $750 territory, which is what scalpers are asking for the Arc A770, you're looking at cards like the GeForce RTX 3080 and Radeon RX 6950 XT being readily available at retail. And in the $430 range, which is what scalpers want to charge for the Arc A750, you can pick up a GeForce RTX 3060 Ti or a Radeon RX 6700 XT, or even a Radeon RX 6750 XT for just a little more.
Despite their greedy efforts, there's just not a lot of room for scalpers to play with inflated pricing for Intel's Arc A770 and A750 cards. That wouldn't necessarily be the case if Intel launched these cards earlier, but the situation for GPUs is much better now than it has been over the past couple of years.
Suffice to say, don't give scalpers your money—those funds are better spent on higher tier cards.