Acer has announced its Predator BiFrost Intel Arc A770 GPU. The GPU was shown on Predator Gaming's twitter feed with little more than a picture and name given.

Since Intel finally announced a launch date for the Arc A750 and A770 GPU at Innovation, news about the GPUs has been coming out in a fast and furious manner. Reviewers are beginning to share their unboxing videos of the two GPUs, and now Acer's Predator Gaming has shown off its version of the A770, the Predator BiFrost. 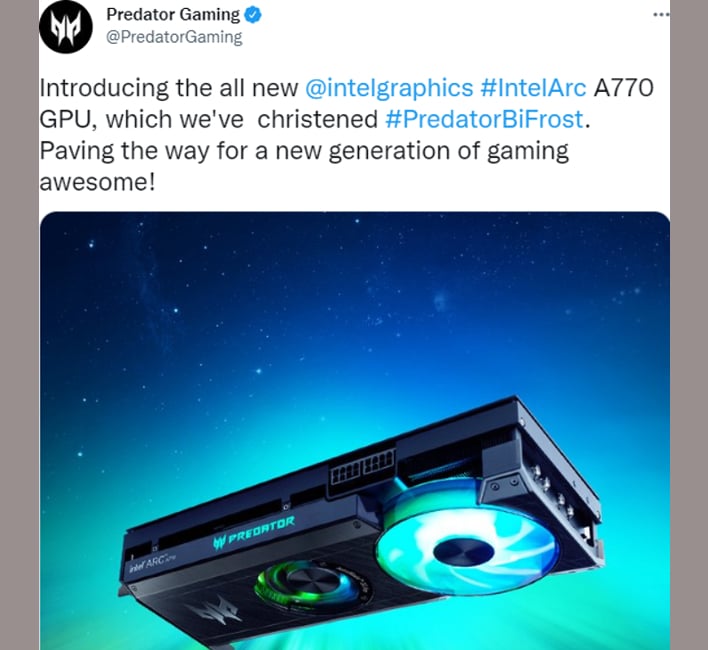 It appears the card will include a two-fan system that incorporates Acer's Aeroblade 3D fan technology. The technology uses a bionic approach with uniquely designed wingtips that mimic the wingtips of owls, and has been implemented on Predator laptops in the past.

The Predator BiFrost is a custom design that has a dual 8-pin power connection, which could deliver better performance than Intel's own A770 LE GPU. The A770 LE and A750 LE cards both use 8+6 pin power connectors instead. Acer has not provided any other information as to possible VRAM (8GB or 16GB) or other specifications. Intel has stated the 8GB version of the A770 will be for board partners only, but it is very possible we will see 16GB variants from partners as well as they have not restricted it, either.

Predator Gaming replied to one post saying, "Keep an eye on our pages for all the latest news and updates." Ryan Shrout of Intel joined in on Twitter by welcoming Predator Gaming and Acer to the Arc family of fun.

This is the first pictured A770 from a board partner we have seen so far, but ASRock, Gunnir and MSI have all said they are official board partners for Intel's desktop GPUs as well. We have reached out to Acer for additional details, so stay tuned, as we will be updating as more news emerges.