Seagate can officially lay claim to offering the fastest mechanical hard disk drives (HDDs) in the world, as it pertains to rated throughput. These arrive a year after Seagate introduced the first NVMe HDD. That's the kind of thing manufacturers are typically inclined to shout from a mountaintop, but for whatever reason, Seagate has taken a much quieter approach to its expanded Exos 2X18 drives.
Be that as it may, these latest additions to Seagate's storage lineup are seriously impressive, in both capacity and speed. To kick things off, Seagate is offering 18TB and 16TB capacities within the Exos 2X18 family, each available in a choice between SATA 6Gbps and SAS 12Gbps interfaces. The SATA variants are actually a touch faster, though both are on par with SATA SSDs. 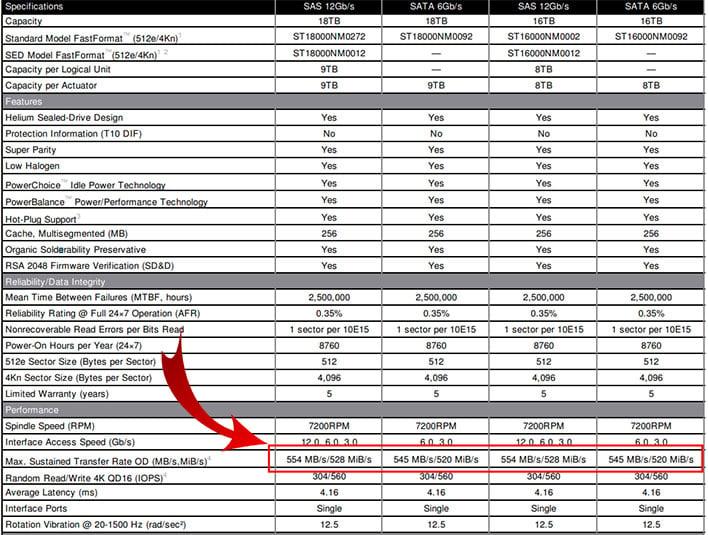 More specifically, Seagate's datasheets on these models reveal that the SATA models are capable of up to a 554MB/s sustained transfer rate, whereas the SAS drives are not far behind at 545MB/s. To put those numbers into perspective, the fastest SATA SSDs typically land in the range of 580MB/s. Samsung's 870 Evo SSD, for example, is rated to deliver up to 560MB/s for sequential reads and 530MB/s for writes.

Of course, NVMe SSDs have supplanted SATA drives in the performance sector, with read and write speeds that top 7,000MB/s in PCIe 4.0 territory. And eventually we'll see PCIe 5.0 models make a move into the marketplace with twice the rated performance of those models.
Here's the thing, though—the average user would be hard pressed to discern between two identical systems save for the SSD, one being an NVMe model and other other a SATA model. It would be noticeable in benchmarks and certain tasks (like large file transfers), but for just knocking around Windows and general purpose computing chores, SATA SSDs still feel fast.

Seagate's magic lies within its MACH.2 multi-actuator technology that was introduced a few years ago. The Exos 2X18 lineup sports dual independent actuators to deliver up to a 2X performance gain over single-actuator drives.
"MACH.2 is the world’s first multi-actuator hard drive technology, containing two independent actuators that transfer data concurrently. MACH.2 solves the need for increased performance by enabling parallelism of data flows in and out of a single hard drive. By allowing the data center host computer to request and receive data from two areas of the drive simultaneously, MACH.2 doubles the IOPS performance of each individual hard drive," Seagate explains.
There's some software trickery going on as well. The drives act as two 9TB or 8TB logical units, one for each actuator. However, the two actuators can simultaneously transfer data to the host system, which reads the drive as a single device.
Other features include a 7,200 RPM spindle speed, 256MB of cache, support for SMART monitoring, and burst rates of up to 600MB/s.
Seagate has not said when its Exos 2X18 HDDs will be available or how much they will cost. However, there is a product page for the expanded lineup on Seagate's website.