At some point in time, Seagate had the grand idea of slapping an NVMe interface on a hard disk drive (HDD), and then decided to actually make such a thing a reality. Then at the OCP Global Summit this week, the storage maker showed off what it claims is the industry's first native NVMe HDD, which raises the question, what's the point of such a drive?
It's a valid question, because reading and writing data from a bunch of spinning platters is far slower than flash-based media, and specifically solid state drives (SSDs) that permeate the market. The vast majority of HDDs don't come anywhere close to saturating the SATA 6Gbps bus, though Seagate's Mach.2 Exos 2X14 with its dual-actuator design does boast an impressively rated 524MB/s sustained transfer rate.
Seagate explains its reasoning in a blog post, and it's not really aimed at pushing the performance envelope, or at least that doesn't sound like the main motivating factor. Instead, it comes down to streamlining storage for easier and cheaper integration in data centers. 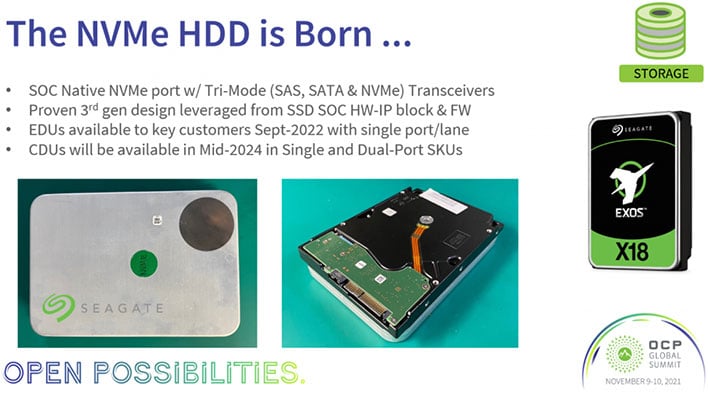 "Seagate’s leadership in implementing native NVMe HDD storage devices will help enable delivery of optimized access to data in support of streamlined storage composability. Its deployment will bring considerable benefits including reduced total cost of ownership (TCO); energy savings; streamlined feature development, performance enhancements, and minimized components required for infrastructure solutions; easier and more flexible scaling; the removal of proprietary code; and easing the path to innovation," Seagate explains.
The NVMe HDD Seagate built was demoed in a proof-of-concept 2U 12-bay JBOD enclosure. A PCIe switch provided the fabric interconnect for the connected HDDs inside. According to Seagate, deploying this kind of simplified stack effectively eliminates the need for proprietary SAS/SATA drives, which in turn lowers the TCO for clients.
This is all to say, don't expect NVMe HDDs to become the norm in the consumer space in the near future. On the commercial side, however, Seagate expects to ship samples of its NVMe HDD in September 2022, with commercial availability slated for the middle of 2024. It's not clear what capacities will be offered, but Seagate's imagery suggests what it demoed was a 14TB model.